The landmark artwork, "Line of Control", was removed from the DLF South Court Mall, which houses the KNMA, on Monday night. 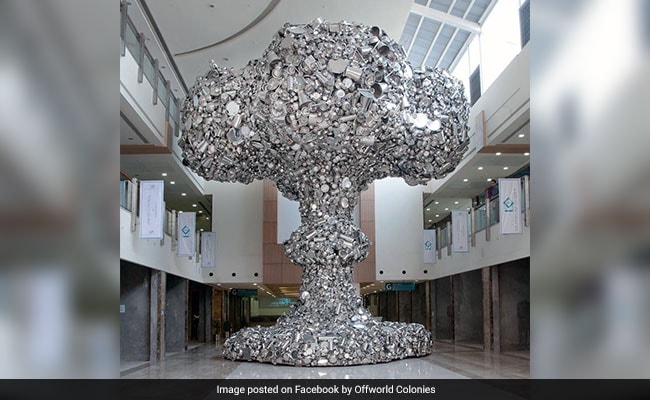 Contemporary artist Subodh Gupta's 33-feet-tall mushroom cloud installation which occupied pride of place in the foyer of a south Delhi mall for seven years has been removed by the Kiran Nadar Museum of Art.

She said the contract with DLF on the artwork that had taken seven days to install, had "way exceeded the deadline".

The move to uproot the installation that used nearly 26 tonnes of stainless steel utensils, including spoons, pots, tiffins, plates, buckets and more, comes a month after Mr Gupta was accused of repeated sexual misconduct in December last year.

Mr Gupta, one of India's most high profile and successful artists, had denied the allegations.

The process of de-installation got delayed by over six months due to unavoidable logistical setbacks, she added.

"Due to required approvals of several agencies involved such as DLF's permission to give us exclusive time to de-install...engineers'' availability to fly down from London and de-install, parking arrangements, our team's availability, the project got pushed back by more than six months," she said.

The sculpture, installed by KNMA in 2012, represented the idea of cities going up in smoke as a result of nuclear warfare.

The title "Line of Control" was also an allusion to the volatile border situation between India and Pakistan.

Ms Nadar expressed doubts about another piece of art in the space occupied by Mr Gupta's installation.

"That space in the mall has started crowding up with shops and kiosks. We have to think hard whether we would want any other large installation in the future to be put up in that space. As of now, we have no plans," Ms Nadar said.