This is because Tulasigeri is home to India's only official flag-making company -- and because the local men have proved themselves not up to the job. 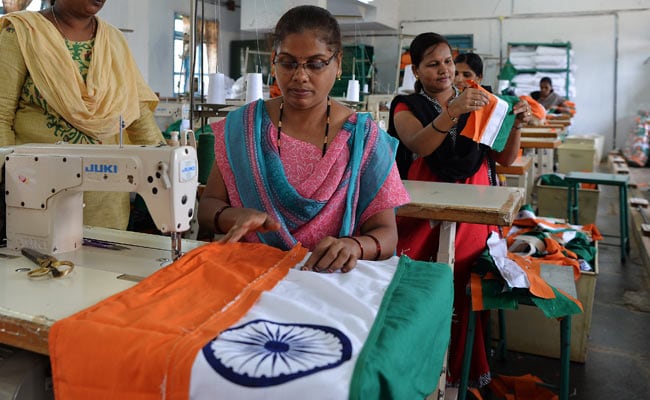 When top government officials salute the national flag anywhere in the world, women in a village at the other end of the country from New Delhi swell with pride.

This is because Tulasigeri is home to India's only official flag-making company -- and because the local men have proved themselves not up to the job.

"The men were not as patient as the women and got the measurements wrong," groans Annapurna Koti, a supervisor at the Karnataka Cotton Village Enterprise (KKGSS).

"They had to unstitch the cloth and re-do the time consuming process," she told AFP. "They left after the fourth day and never returned."

Around 400 people work for the state-owned company in the southern state of Karnataka, 2,000 kilometres (1,200 miles) from the capital, most of them women.

The production takes place at two sites: in Tulasigeri where the raw products are processed and in Bengeri around two hours away where the finished products are made.

The female employees perform all the intricate parts of the process such as spinning the cotton and weaving the thread into cloth on foot-powered looms.

Last year, they produced around 60,000 tricolours.

Their flags hang at all official events and government buildings, at Indian embassies across the world, as well as at schools, village halls and on official cars.

The guidelines in the national flag code of India and from the Bureau of Indian Standards are strict, covering everything from the exact shades to the stitching size.

"The piece is rejected if there is even the slightest error," Nirmala S Ilakal, who has worked in the printing department for 15 years, told AFP.

Most workers, especially the women -- who also manage their households -- have rarely travelled outside their local districts.

Promoted
Listen to the latest songs, only on JioSaavn.com
But Koti, the supervisor, says that knowing that their handiwork goes far and wide goes some way to compensating for this.

"We can't go outside to different places but the flags we make go all over the world and I feel proud to see everyone saluting them," she said.