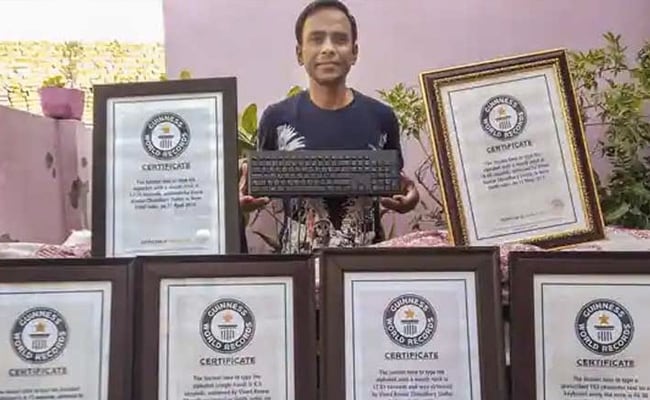 Vinod Kumar Chaudhary spends his days punching numbers at Jawaharlal Nehru University but not many know that this unassuming, albeit talented, man has nine Guinness World Records to his credit.

Mr Chaudhary, 41, who works as a computer operator at JNU's School of Environmental Sciences (SES), set his latest record during the lockdown last year that was imposed due to the COVID-19 pandemic.

"I was always fascinated by speed. As a child I was very enthusiastic about sports but as I grew up I could not pursue sports due to some health issues. I, then, developed a similar passion for speed on computer. I made my first record in 2014 when I typed 103 characters in 46.30 seconds with my nose. This is the shortest time taken so far to do this kind of typing," Mr Chaudhary told PTI.

"Once, I got my certificate for the record, it gave me a different kind of motivation and I started practising for more such records. I spent next one year practising and in 2016 I made two records," he said.

Mr Chaudhary, who has a masters degree in Sociology, in 2017 made a record of typing all alphabets within 18.65 seconds holding a stick in his mouth.

In 2019, Mr Chaudhary made another entry in the Guinness book for fastest typing with one finger where he punched all alphabets in 29.53 seconds.

"My aim is to make over 19 entries in the Guinness book, a record held by veteran cricketer Sachin Tendulkar. I keep looking for new ideas and practising for them," he added.

The Nangloi resident says he wants to run a full-fledged computer institute which does not have any infrastructure limitations and can provide free training to the needy.

"Right now I run it at home. I have few computers where students can practice but I have my own limitations financially. I plan to expand the centre some day," he said.

Mr Chaudhary said his latest record was not for typing as he wanted to try something new.

"My last record is for maximum touching of hand by a tennis ball within one minute. I could do it 205 times. This is the first such record in the Guinness book. When I proposed, they gave me a target of 180," he added.