"Work Is Worship": May Day, Labour Day Wishes Pour In On Twitter

Labour Day or May Day honours the hard work of workers across the world and celebrate their achievements. International Workers' Day is celebrated on May 1 every year. 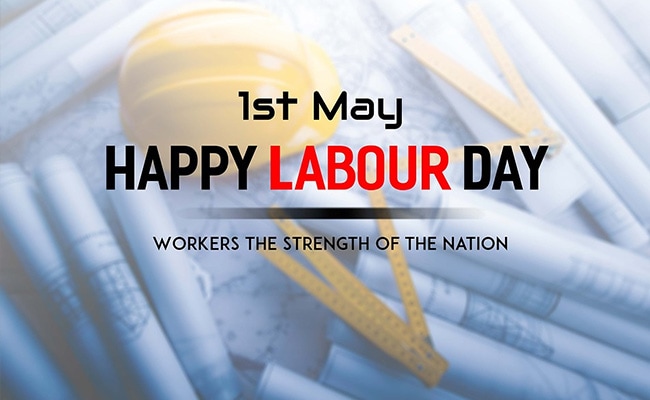 1st May also coincides with the foundation day of Maharashtra and Gujarat.

On May 1st, International Labour Day today, political leaders took to Twitter to wish the workers and labourers of the country. On workers' day, they saluted their hard work and the toil they do every day for a prosperous nation. 1st May also coincides with the foundation day of Maharashtra and Gujarat, celebrated as Maharashtra Diwas and Gujarat Diwas. The stock markets were closed and several banks will also be closed today. Bengal Chief Minister Mamata Banerjee shared greetings on the micro-blogging site on May Day and also talked about the social security benefits that the state government provides for unorganised workers through Samajik Suraksha Yojana.

"On #InternationalWorkersDay, greetings to all workers around the world & their families. In #Bangla we are providing a comprehensive package of social security benefits like PF, health cover, etc. universally to unorganised workers of the State through Samajik Suraksha Yojana," Ms Banerjee tweeted.

"There has been a four-fold increase in the number of subscribers under the Samajik Suraksha Yojana. Nearly 1 crore workers are covered under this new and improved scheme," she added.

Labour is our most valuable resource pic.twitter.com/ToX4TUB6Ox

"My warm greetings on #InternationalWorkersDay to all worker friends and their families. I salute them for their dedication and hard work in building our nation strong and prosperous," tweeted Arunachal Pradesh Chief Minister Pema Khandu on Labaour Day.

On Labour Day, greetings and good wishes to our hardworking workers, both men and women. We celebrate the grit and dedication of our countless workers who continue to build our country and lay the foundations for a better, more prosperous India #PresidentKovind

Saluting the zeal of the workers, Union Minister Suresh Prabhu tweeted, "This Labour Day, I salute the resolve, zeal and drive of all those who work hard to make India a proud country!"

BJP spokesperson Sambit Patra, in a tweet, said, "For all those who toil and construct so that others may enjoy... Happy May Day."

Punjab Chief Minister tweeted that workers' sweat and toil is integral to Punjab's growth and development.

"On the eve of #MayDay, I salute our diligent & laborious workers, be it in farms, offices or factories. Their quiet and continuous sweat & toil has been integral to Punjab's growth & development. Let's pledge to stand by them & work to bring smiles in their lives," Mr Singh shared on Twitter.

Labour Day or May Day honours the hard work of workers across the world and celebrate their achievements. It is an annual public holiday in many countries. Labour Day has its origins in the labour union movement in the United States in the 19th century when the industrialists used to exploit the labour class and made them work up to 15 hours a day. The workers rose against this exploitation and demanded paid leaves, proper wages and breaks for the workforce. The eight-hour day labour movement advocated eight hours for work, eight hours for recreation, and eight hours for rest. The theme of Labour Day 2019 is "Uniting Workers for Social and Economic Advancement".