The Indian Mathematics Wizard Who Is 'Quicker Than The Calculator' Neelakantha Bhanu Prakash: "My brain calculates quicker than the speed of a calculator"

"Beating 29 competitors, up to 57 years of age, from 13 countries, I won the gold medal with a clear margin of 65 points. The judges were spellbound by my speed; they required me to perform more calculations to confirm my accuracy," Neelkantha Bhanu Prakash told news agency ANI.

The Mind Sport Olympiad was held virtually with 30 participants from the UK, Germany, UAE, France, Greece and Lebanon. The math event was first held in 1998.

"I hold four world records and 50 Limca records for being the 'fastest human calculator' in the world. My brain calculates quicker than the speed of a calculator. Breaking these records, once held by Math experts like Scott Flansburg and Shakuntala Devi, is a matter of national pride. I have done my bit to place India on the global level of Mathematics," the proud champion said. 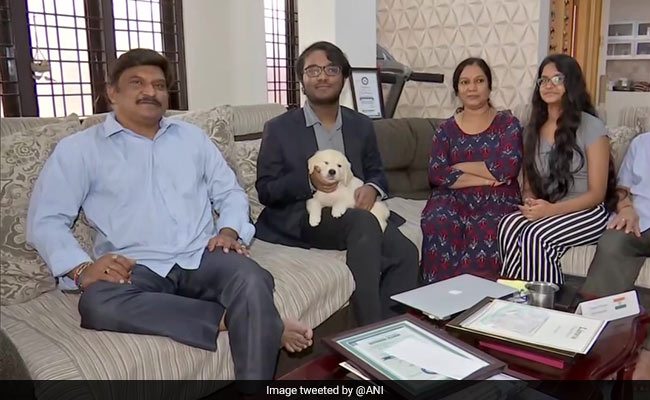 Image of Neelkantha Bhanu Prasad (centre), Mathematics champion, with his family in Hyderabad

"This is the first time that India has won a gold medal. It is the most prestigious international competition for games of mental skill and mind sports...This is equivalent to any other Olympic event...," the Maths wizard added. His vision is to create "VISION Math" labs and reach out to millions of children to make them start loving the subject.

"Three out of every four students who study in the government schools in India have trouble in understanding basic Mathematics. The phobia is the cause for kids opting out of rural schools in India." he said, adding that "for any country to develop and thrive globally, numeracy is as important a skill as literacy."

"Bhanu has proved to be the pride of India as he is the first Indian to win a gold medal at the Mind Sports Olympics...," said Srinivas Jonnalgadda, father of the champion. He is proud of his son's dream of removing the fear of math in children. "Bhanu wishes to instill a sense of enjoyment when children learn Maths...," the Mathematician's father said.