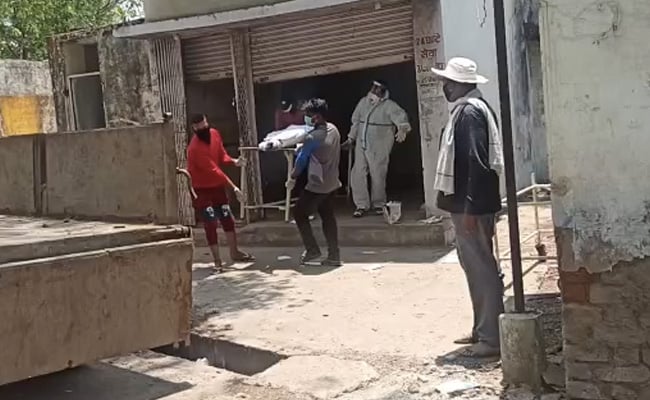 Screengrab from a video in which civic employees were seen dumping the body in a garbage vehicle.

The body of a 21-year-old man, who allegedly died by suicide, was taken for the funeral in a garbage vehicle in Madhya Pradesh's Dewas district, following which the local civic administration suspended its health official and terminated the services of three temporary employees.

The incident took place in Sonkatch town on Saturday following which a video of it went viral on social media.

In the video, some civic employees were seen dumping the body in an empty garbage vehicle.

The opposition Congress hit out at the Bharatiya Janata Party over the incident, but the ruling party said immediate action was taken by local civic authorities.

According to sources, the victim, who was a resident of Rolupipalia village, had allegedly died by suicide and the body was being sent for its funeral to a burial ground from the mortuary of a local health centre after post-mortem.

Sonkatch Municipality's chief municipal officer Ravi Bhatt said that the civic body has performed the funeral of 67 people since April 18 this year, and also admitted that the unclaimed body was sent in a garbage vehicle on Saturday.

He said an inquiry has been ordered into the incident and, the civic body's health department in-charge was suspended and the services of three temporary employees, including a sanitary supervisor, were terminated.

Mr Verma, on Twitter, said he had provided Rs 85 lakh for amenities in the Sonkatch Hospital from his local area development fund.

"Despite this, dead bodies are being transported in garbage vehicle," he said.

He also accused the BJP-ruled state government of "managing headlines and not performing the actual work".

"Verma, who represents this area in the state Assembly since a longtime, had earlier been a state cabinet minister. He also has some responsibility for such a situation in his constituency," Mr Kothari said.