A man who allegedly created a fake Facebook account of Acharya Balkrishna of the Patanjali Group and engaged in "vulgar conversations" with the people was arrested in Noida. 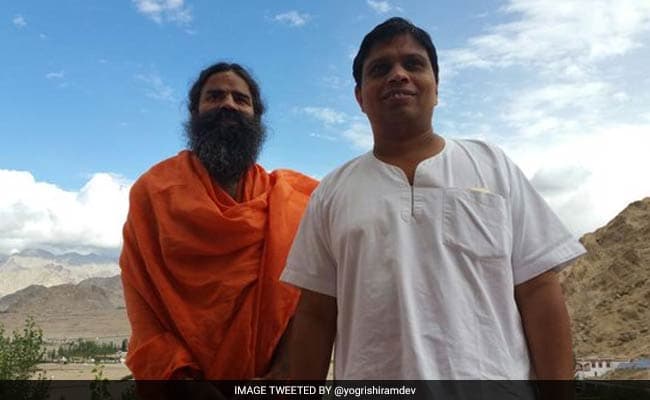 Acharya Balkrishna is the managing director of the Patanjali Ayurved. (File)

A man, who allegedly created a fake Facebook account of Acharya Balkrishna of the Patanjali Group and engaged in "vulgar conversations" with the people, was arrested in Noida today, police said.

Mohammad Zishan, in his 30s, of Chilkana in Saharanpur, was arrested in the morning at a car showroom in Sector 10 where he had come for some work, they said.

A complaint in this regard was made on August 4 at the Sector 20 police station in Noida by Pramod Joshi, the chief executive officer of the Vedic Broadcasting Limited.

Acharya Balkrishna, the managing director of the Patanjali Ayurved, is also the director and promotor of the Vedic Broadcasting Limited.

"The unidentified accused has created a fake Facebook profile of Balkrishna and was chatting with his followers in an indecent and vulgar manner which was damaging his reputation," Mr Joshi wrote in his complaint to the police.

Station House Officer, Sector 20, Manish Kumar Saxena said, "The cyber cell of the police had been tracking Zishan since the case was registered. He was arrested this morning."

He has been charged under the Indian Penal Code sections 419, 420 and 500 -- cheating, fraud and defamation, the SHO said. The accused has also been charged under Section 66 D of the Information Technology Act for cheating by personation by using computer resource, Mr Saxena said.

The police said they have seized the smartphone and two sim cards from Zishan which he used for the activity. He has been remanded in judicial custody, they said.