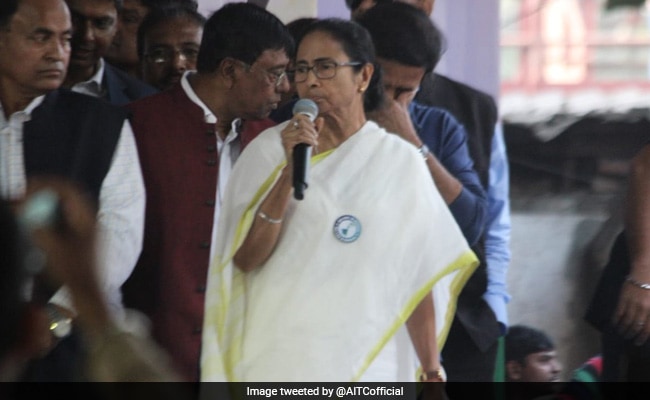 In one of her strongest attacks on the BJP, Bengal Chief Minister Mamata Banerjee questioned if the party was a "washing machine" -- the only one that can legitimise citizenship. The Bengal Chief Minister has refused to implement the Centre's new citizenship law and the National Registry of Citizens, which she said today were "two sides of the same lollipop".

On the third straight day of her protest against the new law, she questioned why the BJP was now demanding birth certificates, and said, "The cat is out of the bag".

"You say no one will lose citizenship. But now you say no pan, no Aadhar, nothing will work... Then what will work? An amulet from the BJP? The BJP has become a washing machine," she added.

Taking on home minister directly, she questioned how many detention camps would he build to house the alleged illegal migrants."You (Amit Shah) are Home Minister of the country and not just a BJP leader. Please maintain peace in the country," she said, adding, "I urge Amit Shah to ensure that the country does not burn. Your job is to douse the fire".

Then she issued a direct challenge: "You have not done 'sabka saath, sabka vikas' (Development for all) but 'sabke saath sarvanash (Catastrophe for all)'. Withdraw CAA and NRC, or else I will see how you implement it here. You have just come with 35 per cent vote, 65 per cent people are not with you, remember that."

The Chief Minister has already stopped work on the National Population Register - considered the first step before rolling out the citizens' list across the country that's meant to weed out illegal migrants.

Ms Banerjee is one of the three Chief Ministers who have refused to implement the citizenship law - meant to expedite citizenship for non-Muslims from Pakistan, Afghanistan and Bangladesh who moved to India till 2014. The other two are Kerala's Pinarayi Vijayan and Punjab's Amarinder Singh.

The Centre has said the states have no choice regarding the implementation of the citizenship law.