Mamata Banerjee, in a letter written by her advocate and delivered to the Calcutta High Court Chief Justice on June 16, said she "reasonably apprehends likelihood of bias"

Mamata Banerjee contested, and lost, the April-May election from the Nandigram seat (File)

Mamata Banerjee has written to the Calcutta High Court to ask that her petition challenging the election of the BJP's Suvendu Adhikari from Bengal's Nandigram be re-assigned to a different court.

The case is currently assigned to Justice Kausik Chanda.

In a letter written on behalf of the Chief Minister by her advocate, and delivered to the Chief Justice of the Calcutta High Court on June 16, Ms Banerjee outlined two reasons for the request.

Justice Chanda was associated with the BJP in the past, Ms Banerjee's letter said, and therefore "reasonable apprehension of bias... in favour of the Respondent...", who is also from the BJP.

Ms Banerjee also said she "reasonably apprehends likelihood of bias" because in April she had objected to Justice Chanda's confirmation as a permanent judge at Calcutta High Court. "... it will lead to a situation and perception whereby the Honourable Judge, in adjudicating the matter, may be said to be 'judge in his own cause'," the Chief Minister wrote in her letter.

"Justice must not only be done; it must also be seen to be done," she added, as she underlined the need to "sustain the confidence of the public in the judiciary". 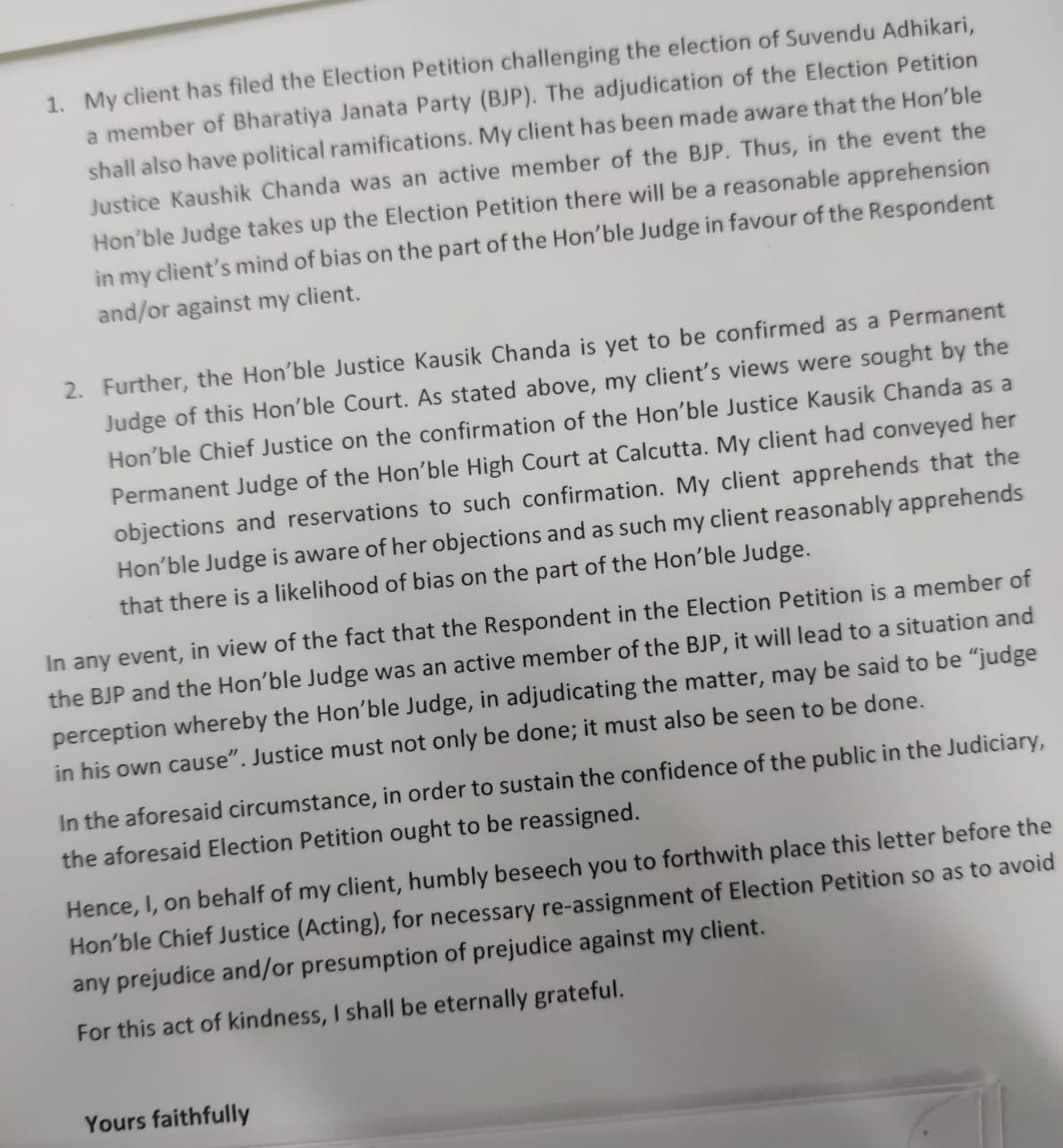 In one tweet he shared undated photographs that appeared to show Justice Chanda at a meeting of the BJP's legal cell; the meeting was also attended by the BJP's Bengal chief Dilip Ghosh.

In another he listed several cases in which Justice Chanda as a practising lawyer - before he became a judge in 2019 - represented the BJP.

Who is that person ‘circled' in both pics ?

Is he Justice Kaushik Chanda of Calcutta High Court ?

Has he been assigned to hear the Nandigram election case ?

Can the judiciary sink any lower ? pic.twitter.com/cBbazffZ35

Trinamool's spokesperson, Kunal Ghosh, suggested Justice Chanda "likely may have a soft spot for (the BJP) unconsciously" and said "perhaps he should leave this case".

Ms Banerjee's petition was briefly heard this morning by Justice Chanda and adjourned to June 24.

Sources said in cases related to the Representation of the People Act the petitioner - in this case Ms Banerjee - needs to be present in court. Otherwise, the court may dismiss the plea.

Mamata Banerjee was not present in court today and it is not clear if she will be next week.

Ms Banerjee had moved the courts in May to challenge the Nandigram election result. She'd contested the seat against protege-turned-rival Suvendu Adhikari and lost by less than 2,000 votes.

She asked for Mr Adhikari's election be declared void on commission of corrupt practices including bribery, promotion of hatred and enmity, and seeking of votes on the basis of religion.

In addition to Ms Banerjee, four other Trinamool leaders who lost their elections also filed petitions.

These are Shantiram Mahato (from Balarampur), Alorani Sarkar (from Moyna), Manas Majumdar (from Goghat) and Ashok Dinda (from) Bongaon Dakshin. In Shantiram Mahato's case the court passed an order saying all poll-related documents must be kept intact.

May 2 - the day of counting of votes - saw several twists and turns at Nandigram.

Ms Banerjee trailed Mr Adhikari for 11 rounds but the trend changed in the next four, with margins ranging from six to 11,000. Mr Adhikari gained in the final rounds and was declared winner.

Indicating possible irregularities, that very evening Ms Banerjee had claimed servers were down for four hours during the counting. She also claimed the election officer had been threatened.

Ms Banerjee had said she accepted the verdict of the people, but she also said she would go to the Supreme Court over the way the Election Commission had conducted the polls.