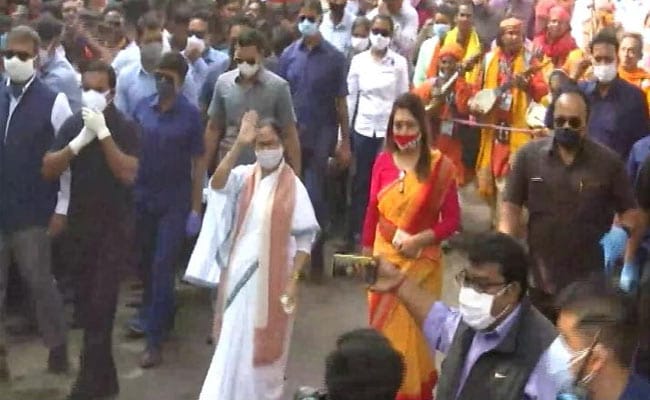 It is raining road shows in poll-bound Bengal.

Strictly speaking, Chief Minister Mamata Banerjee's road show at Bolpur today was really a padayatra - very different from Union Home Minister Amit Shah's a week ago. She walked for 4km while he rode in an open mini-truck.

He held not one but two road shows - Amit Shah style - at Nandigram and from Titagarh to Khardah just north of Kolkata.

The vitriol between the chief minister and BJP's newest recruit was nearly matched.

She mocked Mr Adhikari. "Just because they throw cash and buy a couple of Trinamool MLAs -- that too the most rotten ones -- do they think they have bought Trinamool Congress?" Ms Banerjee said. "Let them first get 30 seats then we will see about 294," she added.

"Bhaipo (nephew) is angry with me. He says I can't even make the 'lotus' bloom in my own house, how will I make it bloom across Bengal," Mr Adhikari said.

Mr Banerjee lives on Harish Mukherjee Street in south Kolkata, not far from where he grew up at the home of Mamata Banerjee on Harish Chatterjee Street. Ram Navami is a festival in April that the BJP has made a point of celebrating in Bengal, Basanti Puja is Saraswati Puja usually held in February.

The reference to the lotus not blooming at Mr Adhikari's home was a barb by Abhishek Banerjee at the new BJP leader whose father Sisir and brother Dibyendu are both Trinamool MPs. Yet another brother Soumendu Adhikari was removed as Kanthi municipal chairman late this evening. Kanthi is the district headquarter town of East Midnapore, a stronghold of Suvendu Adhikari.

Mr Adhikari supporters have claimed they were attacked when on their way to join his road show at Nandigram today. Police called it a fight between locals and a group of people, brought quickly under control. BJP leaders claimed many injured workers were rushed to the hospital.

Without naming her, Mr Adhikari mocked Mamata Banerjee this afternoon for cancelling her meeting at Nandigram on January 7. The Trinamool has said the chief organiser of the rally, senior MLA Akhil Giri had contracted coronavirus and therefore Ms Banerjee had put off her visit. Mr Adhikari suggested she did so as he was holding are rally at Nandigram the very next day and his would be bigger.

"Whenever the cancelled rally is held, I will hold a rally at the same place the very next day," he said.

Mr Adhikari's second road show was from Titagarh to Khardah. It began from the spot where BJP youth leader Manish Shukla had been shot dead on October 4.