Mallikarjun Kharge had on March 1 written a similar letter to the prime minister while boycotting the earlier meeting of the Lokpal Selection Committee as a special invitee'. 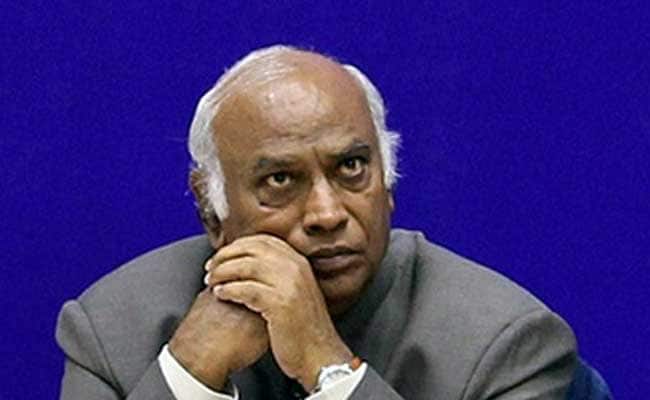 Mr Kharge said a special invitee invitation is to exclude the voice of the opposition. (File)

New Delhi: The Congress today once again boycotted the meeting of the Lokpal Selection Committee with its leader in Lok Sabha Mallikarjun Kharge saying that he was invited by the government as a 'special invitee' with the singular intention of excluding the opinion of the opposition in the selection process.

Mr Kharge shot off a letter to Prime Minister Narendra Modi declining the offer to attend the meeting and alleged that his government has not accorded priority and importance to the issue and its "double standards" stood exposed.

He alleged that the process of appointing the Lokpal under such circumstances would be vitiated if the voice of the opposition is not included.

"Inviting the leader of single largest opposition party as a 'Special Invitee' is done with the singular intention of excluding the opinion of the opposition from the selection process of Lokpal," he said in his letter

Mr Kharge had on March 1 written a similar letter to the prime minister while boycotting the earlier meeting of the Lokpal Selection Committee as a special invitee'.

He had said that a special invitee invitation is a concerted effort to exclude the voice of the opposition in Lokpal selection.

In his latest letter, the Congress leader said "it is deeply disappointing that not only did the earlier letter go unacknowledged, but also the serious concerns that were raised in that letter continue to go unaddressed as seen by the issuing of the latest office memorandum from DoPT (Department of Personnel and Training)".

The Congress leader said the government is aware that there is no provision in the Lokpal and Lokayuktas Act for a 'special invitee' without rights of participation, recording of opinion and voting in the procedure and it has been done only to "mislead" the nation and the people, rather than sincerely seeking the participation and opinion of the opposition.

"Therefore, to participate in this charade while your government runs roughshod over the intent and spirit of the Lokpal Act would amount to dereliction of my constitutional duty," he said.

Mr Kharge said the people of the nation should know that the government has wasted four precious years in the fight against corruption by not amending the Lokpal Act to include the leader of single largest opposition party in the Lok Sabha as a member of the selection committee under the said Act.

"This would have established the bona fides of the government in fighting corruption before the people," he said.

"If the government is, indeed, serious about ensuring that the Lokpal is appointed with the sanctity it deserves, I would once again suggest that the government bring in the necessary amendment by way of an ordinance to include the voice of the opposition in this process.

"Under these circumstances, I must once again respectfully decline the invite as 'special invitee' to prevent any dilution of the letter and spirit of the Lokpal Act, 2013," Mr Kharge said in his letter to the prime minister.

Mr Kharge said the government's "double standards in this matter stand exposed" as a similar amendment was made to Delhi Special Police Establishment Act in 2014, where leader of the single largest opposition party was made a member of the Selection Committee for the appointment of director of the Central Bureau of Investigation.

"It is apparent that the appointment of the Lokpal has not been accorded the same degree of importance or priority by your government," he said.

The Congress leader told the prime minister that he would be aware that the amendment bills to the Lokayukta Act to include the leader of single largest opposition party in the selection committee were moved and even approved by the select committee. "Yet till date your government has never bothered to list the same for debate or voting," he said.

"It is clear that the current exercise is merely perfunctory gesture to assuage the letter of the Supreme Court's direction," he said.

Mr Kharge urged the government to amend the Act to include the leader of single largest opposition party in the selection committee and bring an ordinance in this regard.

"The repeated conduct of the government in this matter both in the Supreme Court and now during this process of appointment defeats the intent to honour the letter and spirit of the Lokpal Act," he said.

Promoted
Listen to the latest songs, only on JioSaavn.com
Asked at the AICC briefing, Congres leader Pawan Khera said "this is a clear case of this government trying to sabotage the institution of Lokpal."

As per the Lokpal and Lokayukta Act, 2013, only the leader of the opposition (LOP) in Lok Sabha is a member of the Selection Committee and since Mr Kharge does not have that status, he is not a part of the panel. A party should have at least 55 seats or 10 per cent of the strength of the Lok Sabha for its leader to get the LOP status.