Mohamed Nasheed, who is leading a parliamentary delegation to India, held detailed talks with Mr Naidu, also the Rajya Sabha chairman, on bilateral ties and the situation in Maldives. 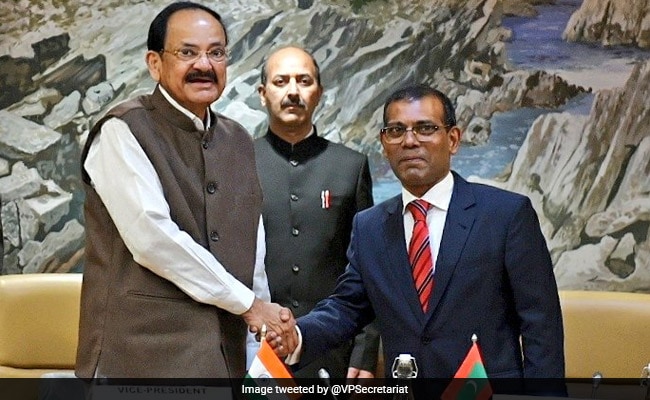 The former president of Maldives said his country, amidst claims of huge investment by Beijing, is undertaking an assessment of assets created through debt funding from China.

Mr Nasheed, who is leading a parliamentary delegation to India, held detailed talks with Mr Naidu, also the Rajya Sabha chairman, on bilateral ties and the situation in Maldives.

He said China's funding is costly and Maldives is keen to know the extent of actual investment flows from China into his country, the sources said.

Mr Nasheed also said that the previous government of his country, unfortunately, did not get along well with India and New Delhi could help the people of his country, who are hungry for constitutional democracy.

"People of Maldives and India read the same books, eat same food and watch same films that form the strong basis for bilateral relations. I am happy that both the countries have similar views on the serious issue of climate change," Mr Nasheed told Mr Naidu, according to the sources.

Mr Naidu appreciated the role of Mr Nasheed, who was elected president of Maldives in 2008 and was removed in a coup in 2012, in strengthening democracy in his country and Maldives' ties with India.

The vice president also recalled his first private visit to Maldives a few years ago.

Referring to India's ''Neighbourhood First'' policy, he said there is substantial scope for further consolidation of ties and cooperation between the two countries, the sources said.

During the meeting, Mr Birla emphasised that the two countries should increase their cooperation not only in the economic fields and employment but also in the social sectors, the Lok Sabha Secretariat said in a statement.

Emphasising that the bilateral trade needs an impetus, Mr Nasheed said he hopes that India would play a purposive role in "rectifying anomalies emerging out of his country's economic engagements with other countries", the statement said.

(Except for the headline, this story has not been edited by NDTV staff and is published from a syndicated feed.)
Comments
Mohamed NasheedVenkaiah Naidu