This poster has come up after Madhya Pradesh Chief Minister Kamal Nath met Ms Gandhi in New Delhi on Friday. He apprised her about the need for a new MPCC president. 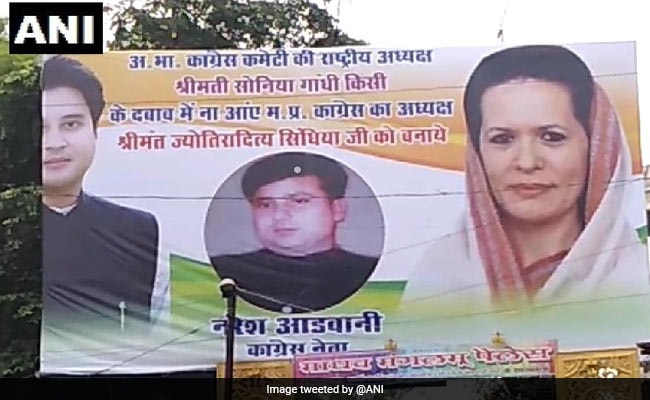 "All India Congress Committee (AICC) president Sonia Gandhi should not come under anyone's pressure and must appoint Jyotiraditya Scindia as the Madhya Pradesh Congress chief," read the poster in Hindi that had pictures of both Ms Gandhi and Mr Scindia on both the sides.

This poster has come up after Madhya Pradesh Chief Minister Kamal Nath met Ms Gandhi in New Delhi on Friday. He apprised her about the need for a new Madhya Pradesh Congress Committee (MPCC) president.

Madhya Pradesh Transport Minister Govind Singh Rajput on Saturday said that it is for Congress party high command to decide whether Mr Scindia will become the chief of the state unit or not.

"(Jyotiraditya) Scindia is a great leader and it is for the Congress high command to decide whether to make him state unit president or give other responsibility. Mr Scindia's stature is very high and he will not struggle for getting to such post," Mr Rajput said at a press conference.

Datia Congress leader Ashok Dangi, however, had threatened top party leadership last week. He had said that he along with 500 members will tender their resignation from the party if Mr Scindia is kept away from the state politics.

Recently, Sonia Gandhi had appointed Mr Scindia as chairman of the party's screening committee for the forthcoming Maharashtra Assembly polls in her first major election-related decision as interim chief.