Prime Minister Narendra Modi, speaking on the concluding day of the two-day Conference of Governors 2017, said there was no dearth of ideas, resources, and capabilities in the country. 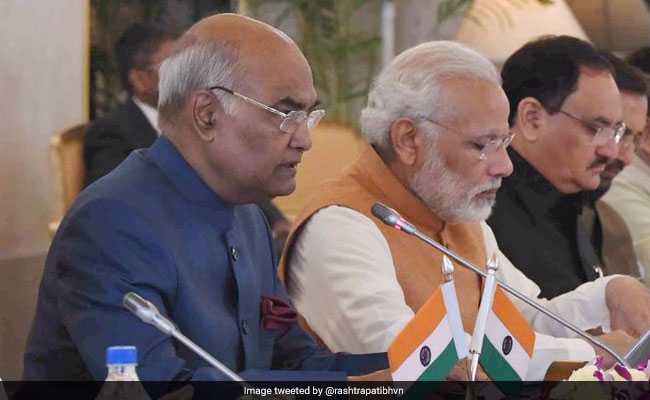 New Delhi: On Friday, Prime Minister Narendra Modi asked governors to make conscious efforts towards the integration of the nation.

The Prime Minister, speaking on the concluding day of the two-day Conference of Governors 2017, said there was no dearth of ideas, resources, and capabilities in the country.

He also urged governors to involve themselves in initiatives such as 'Ek Bharat, Shreshtha Bharat' (one India, great India) and 'Run for Unity', a statement issued by Rashtrapati Bhawan said.

"Deliberations on both achievements and problems between states, will give a new dimension to cooperative federalism," President Kovind said during the concluding ceremony.

"The president said that states and governors should share information about their successful programmes with their counterparts," according to the statement.

In his remarks, President Kovind said that governors can give direction to the younger generation and play an important role in shaping the future of the country by constantly engaging with students and teachers.

"They can inspire universities in their states to develop as innovation centres. The role of the governors becomes even more important in ensuring education and development in tribal areas," the President said.

He said that during the course of the conference, useful experiences were shared about issues pertaining to cleanliness, the environment, conservation of energy and cutting down of wasteful expenditure.

President Kovind said many Raj Bhavans have been accorded the status of heritage buildings.

He urged that special features such as 'green building' and 'smart building' be included while keeping the heritage status of Raj Bhavans intact.

The President reiterated that India will emerge as a developed nation only when every state develops.

He expressed confidence that governors and lieutenant governors would continue to make important contributions in giving a new direction to development in their respective states.

Speaking on the occasion, Vice President Naidu said that governors should act as catalysts and facilitators in the change process.

"The ultimate aim is to serve common citizens and ensure that the benefits of development reach the people," he said.

Home Minister Rajnath Singh said that the governors can act as a bridge between the Centre and the states.

The governors can contribute towards strengthening confidence building measures so that peoples' faith in the democratic system is maintained, he said.

Earlier in the day, governors made brief remarks on special issues pertaining to their respective states and union territories.

Presentations on the sessions on 'Infrastructure for New India 2022', 'Public Services for New India 2022' and 'Higher Education in States and Skill Development' -- which had taken place on October 12, 2017 -- were also made today.

Since then, 48 such conferences have been organised in Rashtrapati Bhavan.
Comments
Narendra ModiRam Nath KovindConference of Governors