In heart-rending photographs that were shared thousands of times on Twitter, Akriti Sood was seen sitting next to her husband Major Anuj Sood's coffin quietly looking into it with grief too powerful to be put into words or tears. 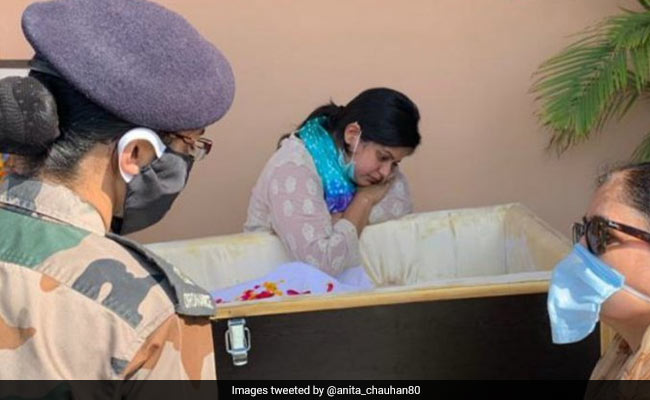 Major Anuj Sood was among 5 security personnel killed in a terrorist encounter in Kashmir.

Photos of Akriti Sood, wife of Major Anuj Sood who was killed in an anti-terror operation in Jammu and Kashmir's Handwara over the weekend, mourning her husband, drew an overwhelmingly emotional response on social media on Tuesday.

Akriti Sood threw her arms around the coffin as it was being put on an army vehicle decorated with flowers, for the short journey from the family's Panchkula home to the Mani Majra cremation ground in neighbouring Chandigarh, news agency PTI reported.

His sister Harshita, who is also an army officer, was seen consoled her sister-in-law.

In heart-rending photographs that were shared thousands of times on Twitter, Akriti Sood was seen sitting next to the coffin quietly looking into it with grief too powerful to be put into words or tears.

This picture left me speechless!

They just got married 3-4 months back. ????@Tiny_Dhillon@ShivAroor@SinghNavdeep@gauravcsawant@smitaprakash@ActorMadhavanpic.twitter.com/vfHjdOMXYH

The 30-year-old officer was among the five security personnel killed in a firefight with terrorists in north Kashmir's Handwara on Saturday night.

A guard of honour was given to Major Sood by the army and soldiers fired three times in a gun salute.

Major Sood's father Brigadier Chandrakant Sood (Retd) lit the pyre. He had told the media the day before that he was proud of his son's sacrifice.

"He was a true son of the nation," he said at his Panchkula home.

Major Anuj Sood was from the Brigade of the Guards regiment, now part of the 21 Rashtriya Rifles.

He joined the National Defence Academy in 2008. He had one dream, which was to join the army, according to his family.

His family said the officer was scheduled to return home after a gap of six months. Having finished his two-year stint in Jammu and Kashmir, he was to join the 12 Guards unit in Gurdaspur.