The event was organised by UNESCO Mahatma Gandhi Institute of Education for Peace and Sustainable Development (MGIEP) in cooperation with the Permanent Delegation of India at the UNESCO headquarters. 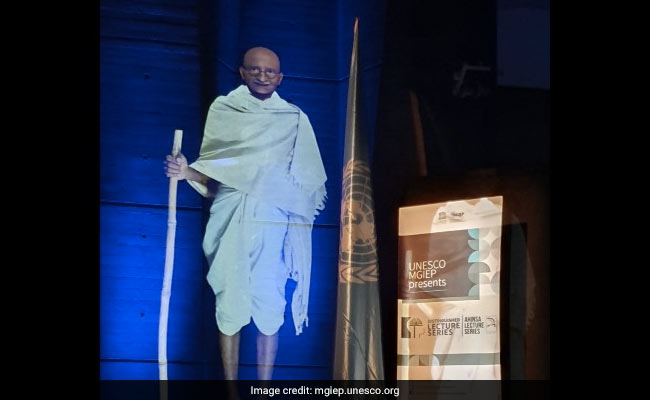 Mahatma Gandhi was brought to life in form of a three-dimensional hologram featured in the fourth Ahinsa lecture held in Paris on Monday to mark the 150th birth anniversary of the ''Father of the Nation''.

The event was organised by UNESCO Mahatma Gandhi Institute of Education for Peace and Sustainable Development (MGIEP) in cooperation with the Permanent Delegation of India at the UNESCO headquarters.

The life-size hologram participated in a panel discussion for 15-minutes on the progress towards the Sustainable Development Goal (SDG) for education. The event attracted about 1000 people, including youth, educators, academics, policy-makers, and delegates from several member states of UNESCO.

Indian Ambassador to France Vinay Mohan Kwatra opened the discussion highlighting the importance of promoting Gandhian values of education to build a culture of peace in the world. His remarks set the tone for a highly engaging dialogue between the hologram of Mahatma Gandhi and the panellists.

The panellists included Gregoire Borst, Professor of Developmental Psychology and Cognitive Neuroscience of Education, CNRS and Vera, El Khoury Lacoeuilhe, Member of Advisory board of UNESCO MGIEP''s TECH 2019, and Anantha Duraiappah, the Director at UNESCO MGIEP.

The discussion started with the panel presenting their perspectives on the meaning of education in the world today. It focused on raising awareness on the future of education and SDG 4 (to ensure inclusive and equitable quality education and promote lifelong learning opportunities for all).

The holographic avatar of Mahatma Gandhi was created using photo-mapped images from 1930-1940 and advanced contouring software and 3D printing to create a life-size wire-frame of the Mahatma.

Commenting on the Ahinsa series, Mr Duraiappah said, "For a better future, we must not just focus on an education that only builds human capital but also human flourishing by providing the next generation with a cognitive and social-emotional experience of the Gandhian values of Ahinsa (non-violence) and Satya (truth). In this way, we can equip our youth to wage peace and sustainability."

Digital sculpting tools were used to add colour and texture to produce a real-life image of Gandhi. The image was then animated and the voice lip-synced to produce a colour hologram with advanced reprographic techniques.

The process was curated by Birad Rajaram Yajnik along with the technical team of Mahatma Gandhi Digital Museums and was sponsored by Gandhi Smriti.

While Gandhi Smriti was amongst the most photographed people of his time and the world has access to his photographs, filmed interviews and radio addresses, it is less than 5 per cent of the compiled 98 volumes of Mahatma Gandhi''s written work. A hologram can bridge this gap and the written word of the Mahatma can be experienced in a life-like scenario.