Shahpur MLA Daulat Daroda had left for Raj Bhavan in South Mumbai to attend the swearing-in ceremony of Mr Fadnavis. 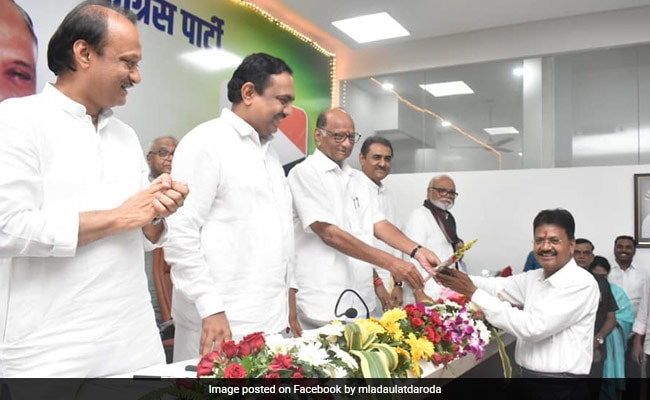 An MLA from the Nationalist Congress Party (NCP) has been reported "missing" since the BJP's Devendra Fadnavis took oath as the Maharashtra Chief Minister, along with NCP chief Sharad Pawar's nephew Ajit Pawar as his deputy, on Saturday morning.

Shahpur MLA Daulat Daroda had on Friday night left for Raj Bhavan in south Mumbai to attend the swearing-in ceremony of Mr Fadnavis. He is incommunicado as of now, news agency PTI reported, adding former MLA Pandurang Barora has filed a missing person's report with the police.

The Shiv Sena, Congress and NCP were busy finalising an alliance to form government in Maharashtra when the centre ended President's Rule early Saturday morning. Ajit Pawar, a senior NCP leader, allegedly had the support of 10 NCP MLAs. Mr Fadnavis took the oath of office at 8 am in a low profile function. Ajit Pawar was sworn in as the deputy Chief Minister.

At a press conference held in the morning, Sharad Pawar, Uddhav Thackeray at his side, denied that he was aware of Ajit Pawar's intended shift. He also paraded three MLAs before the media, who said they ended up at the Governor's house by a ruse from Ajit Pawar. He also said his nephew didn't have the claimed support of the MLAs.

Hours after the BJP's stunning move, several NCP MLAs, who had reportedly supported Mr Fadnavis, were seen at the NCP office. In an evening meeting, 50 out of NCP's 54 MLAs were in attendance.

The Shiv Sena, Congress and NCP, meanwhile, have moved the Supreme Court against the centre's move to end President's Rule and the Governor's invitation to the BJP to form government. The court will hear their petition this morning.

The BJP and Shiv Sena, allies for decades, had together won majority in the recent Maharashtra elections. However, the two parties fell apart over Uddhav Thackeray's "50:50" demand, which included rotational chief ministership.

Amid Sena's insistence that the Chief Minister's post was promised to them before the state polls, the BJP turned down the Governor's invitation to form government citing lack of number required to form government. President's rule was imposed in the state on November 12.

The Sena then approached the NCP and Congress. After initial reluctance from the Congress, the three parties had reportedly agreed to form government with Uddhav Thackeray as the Chief Minister. A common minimum agenda was also being worked out.

However, before the three parties could approach the Governor, the BJP, in an unannounced move, formed the government.

The BJP will have to take a floor test to prove its majority.