No Government In Maharashtra, Sena's Sanjay Raut Says. Then, A Question 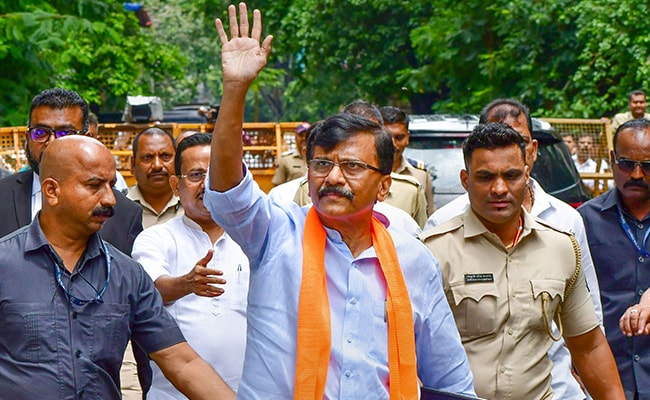 There is no government in the state because this is an illegal government," Sanjay Raut said.

Shiv Sena leader Sanjay Raut on Thursday claimed there is no government in place in Maharashtra at present as the Eknath Shinde-led dispensation is "illegal", and asked where Governor Bhagat Singh Koshiyari is when rains are lashing in the state.

Talking to reporters in Mumbai, Sanjay Raut said cholera has broken out in many parts of the state that has resulted in deaths.

"Maharashtra is again under a lockdown. Nearly 100 people have died due to floods," he said.

According to the state government figures, 83 people have died due to rain-related incidents between June 1 and July 10. These deaths were caused by incidents like floods, lightning strikes, landslides, falling of trees and collapse of structures, among others, the state disaster management authority had said in a report.

On Wednesday, the state health department said 181 people have been infected with cholera, of whom five have died.

"Where is our governor now? There is no government in the state, there is no cabinet," he said.

The Shiv Sena insists that the new government has been illegally sworn in as the disqualification plea of Shinde and 15 other rebel Sena MLAs is pending in the Supreme Court.

A total of 40 Sena MLAs had rebelled against the party leadership, leading to the collapse of the Uddhav Thackeray-led Maha Vikas Aghadi (MVA) government in the last week of June.

"Floods are wreaking havoc in the state. Where is the governor? He was guiding us till yesterday. Now where is he? His guidance is now needed for the state," Sanjay Raut said.

The Rajya Sabha member said many Sena MLAs, who have switched side, could be disqualified. The sword of disqualification is hanging over the rebel legislators, he said.

The cabinet expansion has not taken place so far as the Supreme Court is yet to decide on the disqualification pleas of the MLAs filed by the party, the Sena MP added.

"Administering oath to (rebel) MLAs is not according to the Constitution. This is political corruption. The governor should not do anything against the Constitution," he said.

Meanwhile, talking to reporters in Nagpur later in the day, Sanjay Raut reiterated that there is no government in place in the state at present.

"The state cabinet comprising only two persons (CM Shinde and deputy chief minister Fadnavis) is currently working. There is no government in existence in the state so far. Why the cabinet is not being expanded is the question," he said at the Nagpur airport.

"Also, this government is illegal. The chief minister has taken the oath even as decision on the disqualification 16 rebel MLAs is still pending in the court," he added.

To a query about former state minister and rebel Shiv Sena MLA Uday Samant's claim that 15 party MPs were in contact with the Shinde faction, Raut said the Sena will continue to have this number (of MPs) even after the 2024 Lok Sabha elections.

On the state government's decision to reduce the prices of petrol and diesel the Value Added Tax (VAT) on petrol and diesel by Rs 5 and Rs 3 per litre, respectively, Sanjay Raut said if people are getting relief then it is a welcome step.