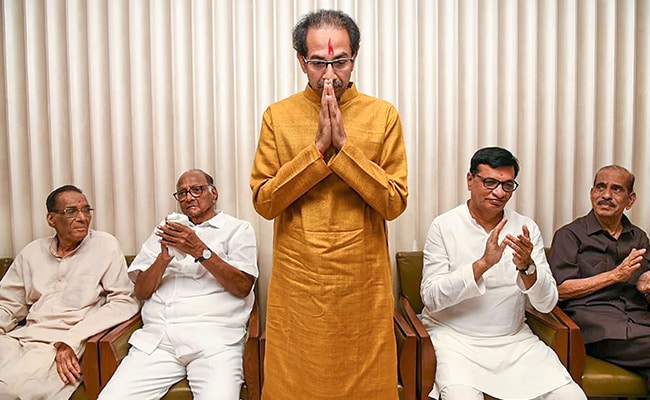 Maharashtra: Uddhav Thackeray heads an alliance of the Shiv Sena, the NCP and the Congress.

The Uddhav Thackeray-led alliance government in Maharashtra is facing a trust vote, a test in which the newly-appointed Chief Minister will have to prove his majority in the state assembly. The floor test comes after a week of rapid developments that began with a surprise oath by the BJP's Devendra Fadnavis and his eventual resignation 80 hours later.

The floor test began with high drama as the BJP members, led by Mr Fadnavis, walked out just before voting. The BJP is protesting against the selection of Nationalist Congress Party's Dilip Walse Patil as temporary speaker. Mr Patil had replaced BJP's Kalidas Kolambkar as pro-tem speaker and a permanent speaker will be elected tomorrow.

Mr Thackeray, 59, heads an alliance of the Shiv Sena, Sharad Pawar's Nationalist Congress Party (NCP) and the Congress, also called Maha Vikas Aghadi. Ahead of the floor test, Mr Thackeray paid tribute to Chhatrapati Shivaji in the state assembly premises. The three parties have issue a whip to their MLAs be present in the assembly.

The temporary Speaker for the special two-day session of the Maharashtra assembly is Dilip Walse Patil of the NCP. "If there is secret voting, they will not be able to win. This is an open challenge," the BJP's Chandrakant Patil said.

Ahead of the trust vote, Ajit Pawar, the NCP leader who turned rebel briefly before returning to the party and Pawar family fold, met his uncle Sharad Pawar this morning. The junior Pawar was accompanied by party colleague Jayant Patil.

The Shiv Sena-NCP-Congress, with the support of some Independents and others like Bahujan Vikas Aghadi, have a strength of 165 MLAs, comfortably higher than the majority mark of 145 in the 288-member assembly. The three parties together have 154 MLAs.

The Speaker of the assembly will be elected tomorrow. While the Congress's Nana Patole will be the candidate from the Sena-NCP-Congress alliance, the BJP announced that MLA Kishan Kathore will be its candidate for the Speaker's post. The new Speaker will then announce the name of the Leader of Opposition in the assembly.

The BJP has objected to the removal of Kalidas Kolambkar as the interim Speaker and said it may approach the Supreme Court.

On Wednesday, all the MLAs who were elected in last month's election were sworn-in in the assembly as per a Supreme Court order. It was a rare occasion when the House assembled for the session without the formation of a government and appointment of a Chief Minister.

Mr Thackeray took oath as the Chief Minister at a mega event in Mumbai on Thursday evening.

The Sena chief was the eighth person to take oath as Maharashtra Chief Minister without being an MLA. According to provisions of the Constitution, any leader who is not a member of the Assembly or Council has to become member of the legislature within six months of taking oath of the post.