The government formation was challenged in Supreme Court by the Shiv Sena-NCP-Congress alliance that accused the BJP of operating stealthily and taking power in the dead of night. 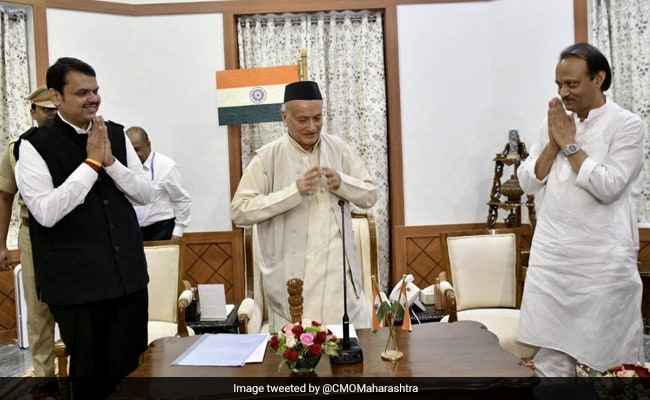 Maharashtra: Sources say BJP, based on Ajit Pawar's reassurances, hoped to have enough MLAs on its side

It did not take long after the Supreme Court verdict for the BJP to realise that its options were limited, sources say. Nationalist Congress Party (NCP) leader Ajit Pawar, who was sworn in as deputy to Chief Minister Devendra Fadnavis, had failed to bring in MLAs to help the BJP touch majority in Maharashtra.

On Tuesday morning, the Supreme Court ordered an "immediate" floor test, to be telecast live, so that Devendra Fadnavis could prove his majority in the assembly. "If the floor test is delayed, there is a possibility of horse-trading, it becomes incumbent upon the Court to act to protect democratic values," said the court.

Ajit Pawar, according to sources, told the BJP and Devendra Fadnavis it would be impossible to win over so many MLAs by Wednesday. News of his resignation emerged after his one-hour meeting with Mr Fadnavis.

Soon after taking oath with Mr Fadnavis in the surprise early morning swearing-in on Saturday, Ajit Pawar had announced that all NCP MLAs including his uncle Sharad Pawar were with him in supporting a "stable" government. Over the next four days, that was proved wrong again and again, as "missing" NCP lawmakers kept returning and pledging their loyalty to Sharad Pawar, some of them alleging they were tricked into attending the oath ceremony.

The fast-paced government formation was challenged in Supreme Court by the Shiv Sena-NCP-Congress alliance that accused the BJP of operating stealthily and taking power in the dead of night.

Sources say the BJP, based on Ajit Pawar's reassurances, hoped to have enough MLAs on its side by the time a trust vote was called for.

But the Supreme Court gave only 24 hours to Mr Fadnavis and said the trust vote would be conducted by a Pro-Tem or temporary Speaker, not a permanent Speaker as the government had asked for.

The top court also ordered an open ballot instead of a secret one, dashing any hopes of NCP MLAs loyal to Ajit Pawar supporting him in the assembly.

The tough ruling gave the BJP no room to manoeuvre, even though as single largest party, it believed it had the strongest claim to power. BJP leaders say the party is prepping for early polls in Maharashtra, believing that the three-party alliance is not viable and will crash soon.