The issue of the anti-defection law has come up following BJP leader Devendra Fadnavis and NCP's Ajit Pawar taking oath as chief minister and deputy chief minister of Maharashtra respectively. 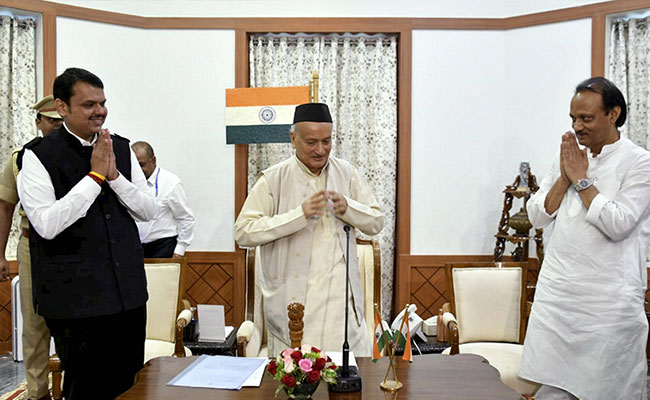 Legal experts have different opinions as to when the anti-defection law comes into play with one of them saying it has no "impact" at the time of government formation while another said it will apply irrespective of the fact whether MLAs have taken oath.

The issue of the anti-defection law has come up following BJP leader Devendra Fadnavis and NCP's Ajit Pawar taking oath as chief minister and deputy chief minister of Maharashtra respectively.

After the sudden twist early in the morning, NCP chief Sharad Pawar said the decision to back Mr Fadnavis was his nephew Ajit Pawar's personal choice and not that of the party.

Senior lawyer and constitutional law expert Rakesh Dwivedi, when asked when and how the anti-defection law will operate in Maharashtra's case, said it has no impact at the time of government formation.

"The anti-defection law has no impact at time of formation of the government. The government is always formed before the oath of MLAs and MPs," he said, adding "Later, somebody will have to move an application before the assembly speaker alleging defection, if any."

He said that bargaining was still on and that is why this is happening.

"Supposing in this case, the faction which claims to be real NCP. Then a question may arise and the Election Commission will have to take a call which is the main NCP for the purpose of anti-defection law. This will also be a long drawn process. Main NCP will be the one which has the majority of MLAS," he said.

Mr Dwivedi said after the government formation, the Governor asks the Chief Minister to prove the majority on the floor of the assembly which is convened, and protem speaker administers the oath to MLAs.

He said after the election of speaker, floor test is taken up and then the anti-defection law comes in if a plea is moved before the speaker in this regard.

Another senior advocate Ajit Kumar Sinha said that the issue of disqualification of MLAs will not arise if the number of NCP MLAs, backing Ajit Pawar, is two-third or more.

On being asked about the manner in which the Maharashtra governor administered oath of office to the chief minister and the deputy chief minister, Sinha said there is nothing wrong in this.

"If they have been able to prove majority before the governor, then the governor is bound to act," he said, adding, "Letter of majority was given to the governor and he acted upon it and administered oath."

Mr Dwivedi refused to comment on the possible outcome of the power tussle and the impact of the anti-defection law in the instant case saying, "I am not commenting on it as I do not know who have got what numbers (of MLAs)."

The BJP, with 105 seats, has forged alliance with Ajit Pawar of the Nationalist Congress Party, which has bagged 54 seats to garner the majority figure.