Maharashtra Floods: Girish Mahajan, a five-time MLA, was yesterday touring Maharashtra's Sangli, one of the worst-hit districts, when he smiled, waved and posed for selfies on a boat, in a video released by news agency ANI. 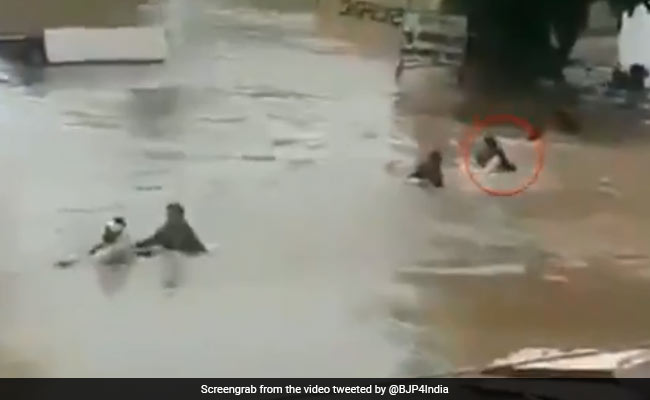 The video shows a man, which BJP claims is Minister Girish Mahajan, crossing a flooded area

Maharashtra Minister Girish Mahajan, roasted after he was seen posing for selfies and waving cheerfully during a survey of a flood-hit district, appeared in a video tweeted by the BJP on Saturday that claimed he swam to reach an inundated village. Using a phrase coined by Prime Minister Narendra Modi, the BJP in the tweet, said this was how the party "earns Sabka Vishwas (everyone's trust)".

The video shows a man, circled in red, crossing a flooded area.

This is how BJP earns Sabka Vishwas. #MaharashtraFloodspic.twitter.com/NA31lieLQ5

Mr Mahajan, a five-time MLA, toured Maharashtra's Sangli on Saturday, one of the worst-hit districts, when he smiled, waved and posed for selfies on a boat, in a video released by news agency ANI.

The video, which went viral on social media, attracted widespread anger as many called out Mr Mahajan for his cheerful demeanour, at a time when Maharashtra Chief Minister Devendra Fadnavis described the state's flood situation to be "very grim".

One user warned Mr Fadnavis saying the incident could "definitely affect u in upcoming elections".

A user attacked the minister for "enjoying (a) free boat ride".

In another tweet, a user termed Mr Mahajan to be a "selfie BJP Minister".

At least 28 people have died in the massive floods that have devastated parts of Maharashtra, and more than two lakh people have been evacuated from five districts, including Kolhapur, Satara and Sangli.

Two days ago, 14 people died after a boat engaged in rescue work capsized, while thousands have been displaced in Sangli.