PM Modi said that despite a lot of talk in the last 70 years, it was only his government which dared abrogate Article 370. 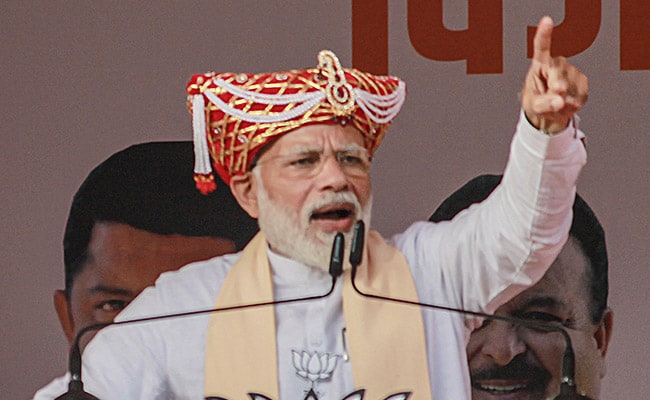 Haven't you felt the effect of the New India in the last 100 days of our second term?: PM Modi

Addressing BJP's campaign rallies for the October 21 Maharashtra Assembly elections at Pune, Satara and Parli, PM Modi also said that despite a lot of talk in the last 70 years, it was only his government which dared abrogate Article 370.

"The entire world can see the new-found confidence of New India. Everyone can feel the change. They are discussing HowdyModi (event in the US)," PM Modi said at the Pune rally.

"Haven't you felt the effect of the New India in the last 100 days of our second term? Do you see its power? Do you see its decision-making abilities and clarity in ideas?" PM Modi asked the crowds.

"Since the last 70 years, the entire country was facing the hurdle of Article 370. There was a lot of talk to remove it, but no one dared to do it. Was this the first government in India with a full majority? No, it is not," he said.

The government has recently taken a lot of measures to bolster the economy, PM Modi said. "We have taken steps to promote manufacturing, start-ups, and have given sops in corporate tax," he said.

"Our government will take every step needed for the bright future of the Indian youth and investment," he said.

India today is one of the top-FDI friendly countries in the world, PM Modi said.

"Every business leader I have had a discussion with globally is keen to come to India. The growth in investment in India in the last five years has been five times," he said.

Be it the government, businessmen or the youth, everyone needs to stay ready for the new economy of New India, he said.

At the rally in Satara, PM Modi asserted that his government adheres to Chhatrapati Shivaji Maharaj's principles of nationalism and national security, and possess the strength to give a befitting reply to those who have "evil designs" on India.

PM Modi said that as Shivaji Maharaj did, his government too has worked to strengthen the defence forces.

The Centre and the state government have adhered to the values of Shivaji Maharaj in the last five years, he said.

"Nationalism and national security are our top priority. Those having evil designs against the country will be given a befitting reply," he said.

"We have taken decisions for national integration which earlier governments had no guts to take," he said.

Hitting out at the Congress-NCP, PM Modi said the two parties opposed decisions taken in the interest of national security and national integration.

The Congress and NCP questioned the bravery of our soldiers, he alleged.

"They even spread false propaganda against Rafale (the deal to buy the French-made fighter jets) and their stand on abrogation of Article 370 has hurt the people of Satara," PM Modi said.

"They leave no chance to malign Veer Savarkar. Congress and NCP does not understand national sentiment. They were taught a lesson in the Lok Sabha elections and now Maharashtra and Haryana will also punish them severely (in Assembly elections and bypolls)," he said.

"Then the issue of (NCP chief) Sharad Pawar entering the fray came up. But, Sharadrao being Sharadrao, he knows which way the wind is blowing and hence refused to contest," PM Modi said.

Addressing the rally at Parli in Beed district, PM said history will have a mention of those who ridiculed the abrogation of Article 370 in Jammu and Kashmir.

"I trust you and your patriotism that you will teach a resounding lesson to those who speak against interests of the country. History will take note of every person who ridiculed the abrogation of Article 370," PM Modi said, alleging that the Congress leaders provided "oxygen" to anti-India elements.

He also said that the process of jailing those who "looted" public money has begun.

"While the Congress and NCP are fighting against each other, which is why many young leaders are quitting these parties, and the seniors are tired and dejected," he said.