Maharashtra election results: BJP's Pankaja Munde said, "I worked for the constituency. Though I was in the government, my struggle for my constituency and people continued. I take responsibility of this defeat" 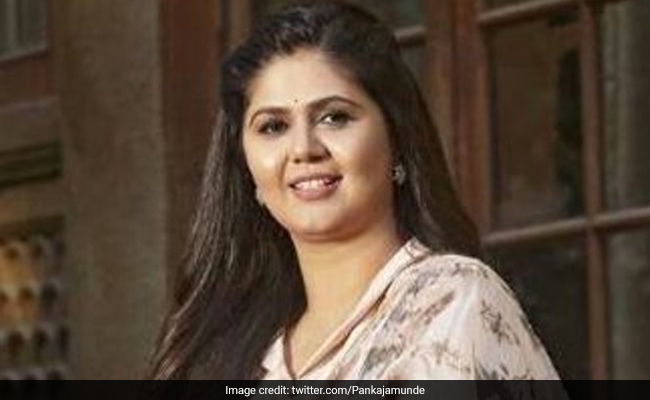 Pankaja Munde, a BJP leader and minister in the Maharashtra government, has accepted defeat in the state elections whose results were announced today, news agency Press Trust of India reported. Ms Munde, who contested from Parli, lost to her cousin and Nationalist Congress Party (NCP) candidate Dhananjay Munde.

Ms Munde had been trailing her cousin by some 30,000 votes before the final count was declared.

"I worked for the constituency. Though I was in the government, my struggle for my constituency and people continued. I take responsibility of this defeat," Ms Munde said, PTI reported.

On the last day of campaigning and her fifth rally at Parli, Ms Munde had collapsed while speaking. BJP workers and her sister and Beed MP Pritam Munde, who was present, rushed to her help.

The BJP may not have it easy in Maharashtra after a lower than expected trends in Haryana.

The Shiv Sena, buoyed by a hugely improved performance, is talking of a 50:50 division of cabinet berths and a turn at the chief minister's post. The trends are seen as a wake-up call for the BJP, which contested the state elections on national themes. The counting of votes for bypolls in 17 states and one union territory is also being held today.

The BJP and its ally Shiv Sena are ahead in around 150 of the state's 288 assembly seats. But the tally is still is way below the 250 seats they were expecting. The BJP, particularly, fell short of expectations. The party was hoping to cross the majority mark on its own steam, but is leading in around 100 seats - way below its 2014 tally of 122. The Sena is heading for a tally of around 60. The majority mark lies at 145.