Maharashtra Government: Officially, Sharad Pawar, who single-handedly ran the opposition campaign, has played down talk of a deal between the NCP, the Congress and the Sena, describing the tussle between the Sena and the BJP as "childish"

NCP-Congress and Sena: Sharad Pawar has played down talk of a tie-up between the three parties

NCP chief Sharad Pawar is to meet Congress president Sonia Gandhi in Delhi on Monday, as the stand-off between the BJP and the Shiv Sena over government formation in Maharashtra continues. Officially the two leaders will talk about the condition of the country's economy, but speculation suggests they will discuss the possibility of supporting the Sena in an attempt to keep the BJP from power. Mr Pawar, 78, who will meet his party MLAs in Mumbai today before leaving for Delhi on Sunday, has sought to play down the importance of the meeting, saying that political parties were allowed to speak to each other without involving either the BJP or the Sena.

The meeting will come three days after a Congress Rajya Sabha MP from the state wrote to Ms Gandhi urging her to "be open to the prospect of forming a government with the Shiv Sena". Husain Dalwai reminded Ms Gandhi that the Sena had extended support to the Congress "on several occasions" in the past.

"... certain sections of supporters of Congress, including supporters from the minority communities are of the opinion that Congress and our ally NCP should be open to the prospect of forming a government with Shiv Sena," he wrote on Friday.

The meeting between Mr Pawar and Ms Gandhi will also come after Sena leader Sanjay Raut, who has been relentless in his criticism of the BJP, met Mr Pawar in Mumbai on Thursday. Mr Raut, who described the visit as a Diwali courtesy call, told reporters: "If the Shiv Sena decides, it will get the required numbers to form stable government". 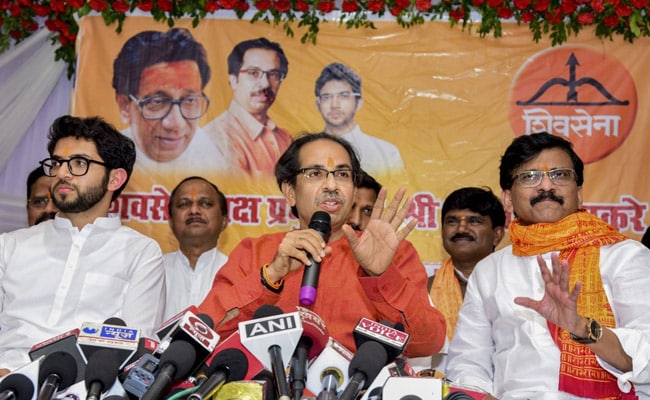 The Shiv Sena wants the BJP to honour a "50:50" deal and rotate the Chief Minister's post

There were also reports that Sena chief Uddhav Thackeray and Mr Pawar had spoken on the phone on Friday, but sources within the NCP have denied that such a call took place.

The Sena and the BJP contested last week's Assembly election together and emerged with 161 seats in the 288-member house. Unfortunately for the BJP, and for Maharashtra government formation, it won only 105 on its own and needs the 56 Sena MLAs to cross the majority mark of 145. Recognising this, the Sena has refused to budge from its demands - "50:50" allocation of ministries and the rotation of the Chief Minister's post after 2.5 years

Officially, Sharad Pawar, who single-handedly ran the opposition campaign, has cooled talk of such a tie-up, describing the tussle between the two long-term allies as "childish" and saying the people of Maharashtra had given his party a mandate to sit in the opposition.

"We do not have a clear majority. People have asked us to sit in the opposition. We accept that mandate and will take care that we play that role effectively," he said on Friday.

Rifts between the Sena and the BJP appeared to widen today after the former called the "President's Rule threat" by BJP minister Sudhir Mungantiwar an "insult" to the people's mandate.

Earlier this week, the Sena and the BJP held separate meetings with Governor Bhagat Singh Koshyari, calling them courtesy visits for Diwali greetings. On Thursday, Uddhav Thackeray's son Aaditya Thackeray led another delegation. This time, it was on farmers' issues, he said.

The tenure of the existing Legislative Assembly in Maharashtra ends on November 8.