Maharashtra Assembly Elections Result: On Saturday, in an unprecedented move, the Shiv Sena demanded written assurances from the BJP that it would honour a "50:50" deal agreed between Uddhav Thackeray and Amit Shah

Tthe Shiv Sena has warned the BJP it will not back down in its "50:50" demand

Shiv Sena leader Sanjay Raut has warned ally BJP that it has the "remote control of power" in Maharashtra, despite having secured far fewer seats in the Assembly elections, compared both to the BJP and its own haul in 2014. The term "remote control of power" is a carefully-chosen throwback to the era of party founder Bal Thackeray, when it was regularly used to explain the chain of command in the first Sena-BJP government that was in power from 1995 to 1999.

"The Sena won fewer seats this time - 56 compared to 63 in 2014 - but it has the remote control of power. The dream that the Shiv Sena will drag itself behind the BJP is busted (after poll results)," Sanjay Raut, a Rajya Sabha MP, wrote in his column for "Saamna", the party's publication.

The Shiv Sena and the BJP contested the polls together despite the former expressing reservations over a seat-sharing deal that saw it fight fewer seats. The BJP emerged as the largest party, with 105 seats to the Sena's 63, but finished below the majority mark of 146 in the 288-member house, leaving it dependent on the Sena to form a stable government.

On Saturday, in an unprecedented move, the Sena demanded written assurances from the BJP that it would honour a "50:50" deal agreed between party chief Uddhav Thackeray and Union Home Minister Amit Shah.

The BJP has yet to respond to the demand; its MLAs are to meet on October 30. According to party sources, Mr Shah will be in Mumbai on that date and could meet Mr Thackeray.

On Friday, Mr Raut took a not-so-subtle dig at the BJP, tweeting a cartoon showing a tiger (the Sena's party symbol) wearing a clock locket (the symbol of the opposition NCP) sniffing a lotus (BJP's party symbol) 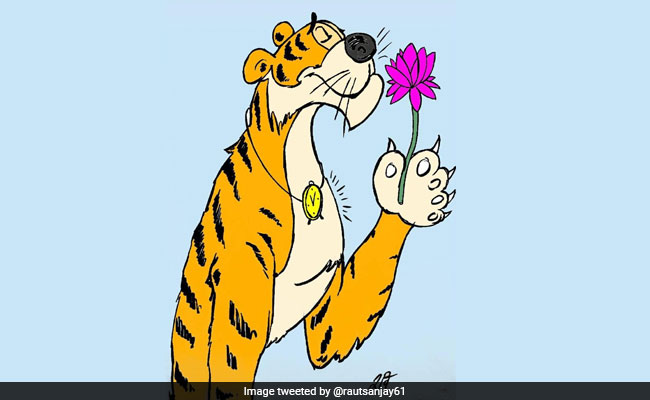 He referenced that cartoon in his column on Sunday.

"A cartoon showing a tiger holding a lotus in its hand says a lot about the current scenario. Not taking anyone for granted is the message," he wrote.

The Sena's stand received unexpected support from the Nationalist Congress Party (NCP), which won 54 seats to emerge as the third-largest party in the house, with veteran politician Sharad Pawar telling NDTV there was nothing wrong with the Sena's demands.

However, the 78-year-old Mr Pawar, who single-handedly ran the opposition campaign, has played down talk of a surprise tie-up between the two parties; according to news agency PTI Sena chief Uddhav Thackeray said he has "other options open". An alliance between the Sena and the NCP, as unlikely as it may seem, will give them a five-seat edge over the BJP.

Mr Raut also said Maharashtra had rejected the BJP's tactic of poaching senior opposition leaders, pointing to former Udayanraje Bhosale who swapped the NCP for the BJP only to end up losing the bypoll for the Satara Lok Sabha seat to his former party.

Ahead of polls in both Maharashtra and Haryana, the BJP and the Sena saw Congress and NCP leaders joining their side. The Sena saw senior NCP leader Sachin Ahir join in July and, last month, the Congress's Harshvardhan Patil quit to join the BJP.

For its part the BJP has insisted that all differences will be resolved.

"There is no confusion in government formation. BJP and Shiv Sena fought and won election in alliance. We will once again form the government. What is decided in alliance will happen," Ashish Shelar, BJP leader and Education Minister, said, according to news agency ANI.