Maharashtra, Coronavirus Lockdown: The state government in its guidelines said only five shops selling non-essential items will be allowed in each lane.

Coronavirus: Maharashtra is the worst-hit state in the country (File)

The Maharashtra government on Sunday allowed several economic activities and eased restrictions in all the coronavirus zones across the state. It has allowed standalone liquor shops in Red, Green and Orange zones, and in the Mumbai region, which is badly hit by the virus. Here is the list of what is open and what is not.

Activities permitted In Maharashtra Amid Lockdown

Travel - from Air, Train or Metro- not allowed. Inter-road movement not allowed. Education institutions, malls and hotels to remain closed. Places of worship and large gatherings will remain banned.

The state government in its guidelines said only five shops selling non-essential items will be allowed in each lane; there is no restriction on the number of shops selling essentials. The shop owners and staff must adhere to the social distancing rules enforced to check the spread of the virus. 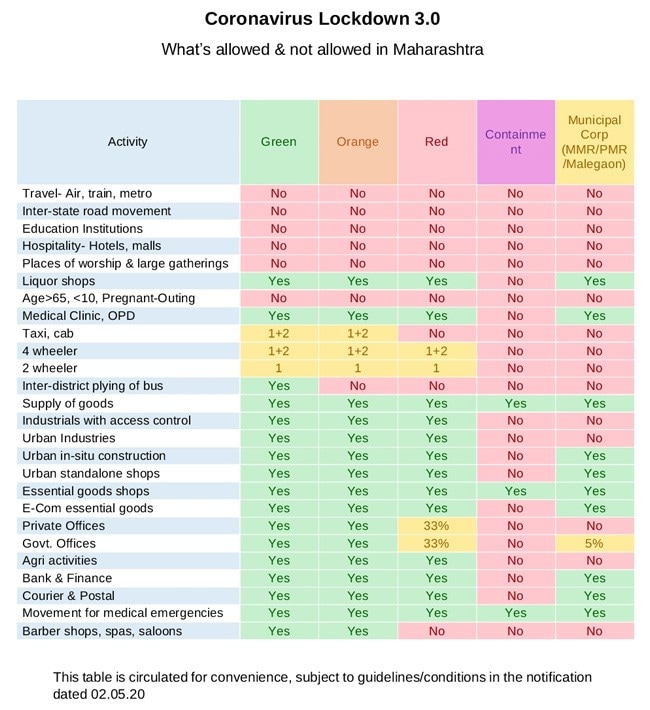 The timings for all shops will be decided by the local authorities, the government says.

Meanwhile, shops in the worst-hit red zones in Mumbai and Pune regions will be allowed with restrictions.

"The Mumbai MMR region and Pune, Pimpri-Chinchwad fall under the Red zone. There is a difference between the other 14 districts and the above-mentioned areas. The state government has prepared one more category which has Mumbai Corporation, Pune corporation and PCMC and Malegaon corporation," Bhushan Gagrani, Maharashtra Principal Secretary, told reporters.

"In this Red zone, we have restricted few activities mentioned in the center's order. Industries which are allowed in Red zones are not allowed in this zone (MMR & PMR) including private offices," he added.