"If PM had done any vikas in the state, the slum would not have been there. There are poor people in the US as well," a senior Congress leader said. 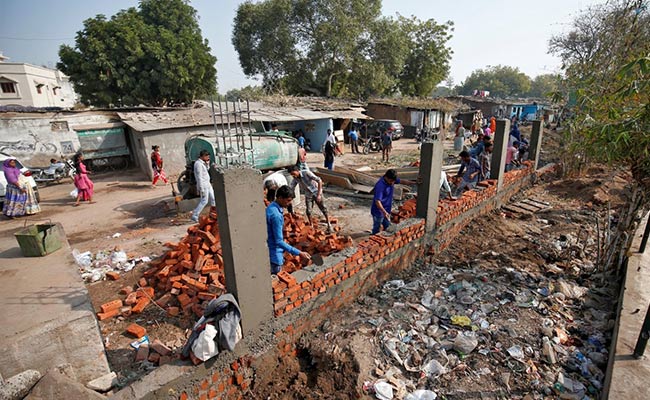 A 500-metre-long wall is being built in Ahmedabad's Sardarnagar to "hide" a slum. (Reuters)

The Maharashtra Congress today said the BJP government's decision to build a wall to keep a slum out of sight during US President Donald Trump's visit to Gujarat on February 24 was "inhumane".

The 500-metre-long and four-feet-tall wall is being built in Ahmedabad's Sardarnagar, situated along a route likely to be taken by Mr Trump's motorcade.

"It is an inhumane act of construction of the wall to hide slums on Trump's route to the stadium from the airport (in Ahmedabad). The Congress condemns such acts," general secretary of Maharashtra Congress Sachin Sawant said.

He said the wall also showed that PM Modi's claims of progress made by Gujarat during his chief ministership were false.

"If he had done any vikas in the state, the slum would not have been there. There are poor people in the US as well. If the US president sees some poverty here, will the skies fall?" he asked.

"PM Modi, in order to get sympathy, himself never shied away from claiming that he came from a deprived background, then why is he now ashamed of the poor and slum dwellers," Mr Sawant added.