Maharashtra Election 2019: Who Is Contesting How Many Seats

The Maharashtra Assembly Elections 2019, for which polling is taking place today, is a clash between two alliances-- the BJP-Shiv Sena "Mahayuti" and the Congress-Nationalist Congress Party (NCP) partnership. Both the alliances had contested the 2014 election separately but seem to have ironed out their differences before the election.

The BJP and Shiv Sena have not left any seat for its smaller alliance partners. The BJP is contesting in 164 seats, whereas the Shiv Sena is contesting in 126 seats. There were reports that the Sena was also pushing for the deputy chief minister post, should the alliance wins the Maharashtra polls. 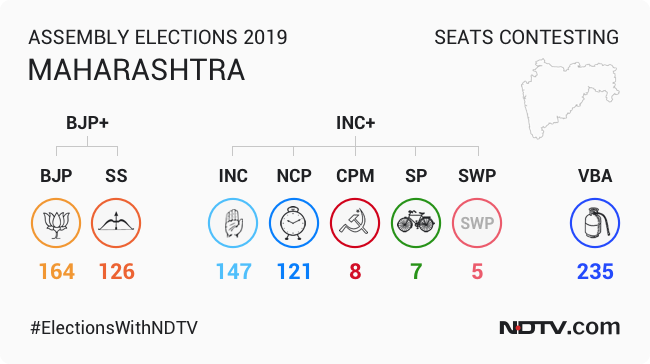 Among other parties, the Maharashtra Navnirman Sena (MNS), led by Raj Thackeray, has fielded 101 candidates, the CPI 16. The BSP has fielded candidates in 262 constituencies. A total of 1400 Independents are also contesting the elections.

Senior BJP leaders, led by Prime Minister Narendra Modi and his cabinet colleagues Amit Shah and Rajnath Singh, campaigned in the states. The central theme of the party's poll campaign in Maharashtra and Haryana was the scrapping of Article 370, which granted special status to Jammu and Kashmir. Prime Minister Narendra Modi dared the opposition to promise people that they would reverse his government's decision in Kashmir if they come to power.

The opposition tried to corner the BJP governments at the centre and in the states on the economic decisions, with Congress leader Rahul Gandhi blamed the ruling party for the economic slowdown.