The photo of veteran leaders Balasaheb Thackeray, LK Advani and Atal Bihai Vajpayee was tweeted on Monday by Union Minister Giriraj Singh to indicate the long road travelled by the estranged allies in Maharashtra. 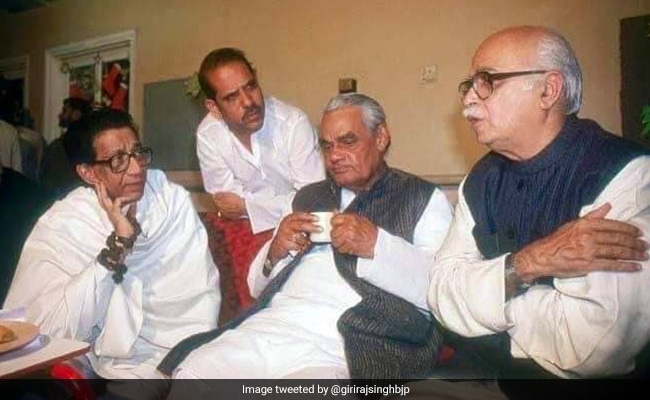 A throwback picture of Shiv Sena founder Balasaheb Thackeray with the BJP's LK Advani and Atal Bihai Vajpayee was tweeted on Monday by Union Minister Giriraj Singh to indicate the long road travelled by the estranged ally in Maharashtra. The post came minutes after the Sena claimed that it would form government in Maharashtra with the Congress and Sharad Pawar's Nationalist Congress Party -- a turn of events that started with the BJP refusing to stake claim to the government yesterday.

The two parties fell out over the Sena's insistence on a 50:50 division of power that involved the Chief Minister's post. The Sena claimed the agreement was made during BJP chief Amit Shah's meeting with Sena Chief Uddhav Thackeray ahead of the Lok Sabha polls and was furious when the BJP not only refused, but denied that such an agreement was made.

On Monday morning the Sena pulled out its lone minister - Arvind Sawant who was in charge of Heavy Industries and Public Enterprises portfolio -- in Prime Minister Narendra Modi's government.

In his tweet on Monday, Giriraj Singh tacitly blamed Uddhav Thackeray for the break-up.

"Bala Saheb's years of penance gave Sanatanis (traditionalists) hope and recognition in Maharashtra. Today, Bala Saheb would be pained to see (the party) go with opponents of Hindutva. History will give testomony to how Bala Saheb united everyone, while others divided."

This is the second time the Sena and the BJP parted company in their 35-year- association formulated in 1989. But an alliance with the Congress is a first.

It was Shiv Sena founder Bal Thackeray who suggested that the BJP and the Sena should come together, in view of the similarity in their ideology, and take on the Congress in the parliamentary election that year. The two parties shared similar views on most key issues, including the temple-mosque dispute in Ayodhya, uniform civil code, and Article 370 of the Constitution.

But inside that alliance, the two parties have been competitors for primacy in Maharashtra. Even when they sat in the opposition, they competed for the post of the Leader of Opposition.

But in the rivalry, the Sena -- 14 years' senior to BJP - always had the upper hand.

But the situation changed in 2014, when the BJP following the huge victory in the national election, refused to accept a smaller share of seats and the alliance broke. The two parties came together after Maharashtra delivered a split verdict, but this time, the BJP played the big brother.

It was not a situation that was acceptable to the Sena and the party spent the better part of the last five years playing the in-house opposition to the BJP at the Centre and the state.

This time, after the assembly election results, the Sena insisted on a 50:50 division of power. Citing his party's compliance to the BJP conditions in 2014, Uddhav Thackeray said this time, his party "will not blink".