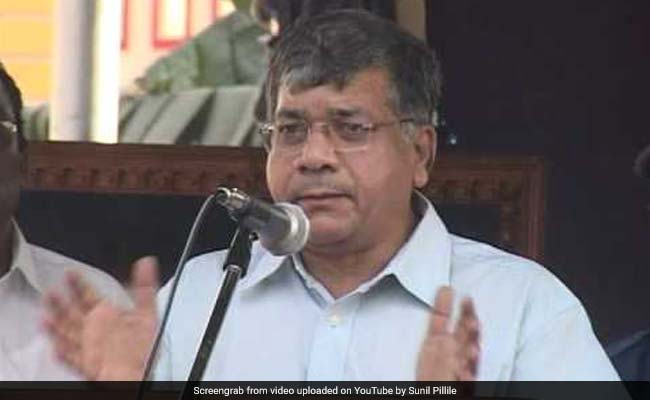 Vanchit Bahujan Aghadi (VBA) chief Prakash Ambedkar has alleged that the language being used by BJP leaders during the election campaigns shows their "dictatorial" attitude which doesn't suit the democracy.

He also charged the BJP-led government of being involved in "corrupt practices", but said its way of grabbing money was different from the previous Congress and NCP-led dispensations.

Addressing an election rally in Maharashtra's Aurangabad district on Monday, he appealed to the Muslim community to support secular forces and start a "new chapter of friendship with VBA".

He said BJP leaders were claiming that they will win around 240 Assembly seats out of total 288 in the state.

"They think they will never go out of power, but they should remember that it is the voters who decide the government, not the political parties," he said.

"The language being used by BJP leaders in their campaign is of dictatorship and doesn't suit the democracy," the Dalit leader said.

Hitting out at the BJP-led government, Mr Ambedkar alleged that it was following the "same corrupt practices of the previous government". "The only difference is their way of grabbing money is different," he added.

He claimed several projects undertaken for expanding the road network served as a medium of grabbing money for the government.

The rates which the sub-contractors get for making roads were quite less, compared to what the head contractors were getting, he said. Mr Ambedkar said the welfare schemes which the BJP-led government was trying to implement were available during the tenure of previous dispensations also.

Hitting out further at the government, he said malnutrition was not just limited to tribal-dominated villages, but was spreading in other areas also.

"But, the government doesn't want to address this issue," he said. On the problem of scarcity in some parts of western Maharashtra, he said if 40 TMC of water going to some private power projects there is reserved for drinking and agricultural purposes, it will end water woes in 50 per cent of the drought-prone areas.

Mr Ambedkar also hit out at the All India Majlis-e-Ittehad-ul-Muslimeen (AIMIM), which snapped ties with his party last month.

"The Muslim ward members in Auragabad were elected on Muslim votes in 2015, but they voted for the Shiv Sena in the state Legislative Council elections held a couple of months back," he added. The AIMIM-VBA alliance did well in the April-May Lok Sabha polls in terms of votes received, but their ties broke ahead of the state Assembly polls.

Earlier, the VBA-AIMIM managed to hurt the Congress-NCP in several seats in the Lok Sabha polls, prompting the opposition combine to call the former as the "B team" of the ruling BJP-Shiv Sena.

Polling for all 288-Assembly seats in the state will be held on October 21 and counting of votes will take place on October 24.