Locals watched as a chopper hovered over the raging river under bridge on Mumbai-Goa highway. (PTI)

Mumbai: The bodies of three women, a bus driver and five others have been found after a British-era bridge collapsed on the Mumbai-Goa highway in Maharashtra on Tuesday night.

The body of bus driver SS Kamle was found 100 km downstream from the collapsed bridge, apparently washed away in the fast-moving Savitri river. He was identified by his ID badge.

Mr Kamle was driving one of the two state-run buses which fell into the river with 22 people when the 50-foot bridge crashed after days of torrential rain in Mahad, around 170 km from Mumbai. Three cars were also swept away. Since yesterday, nine bodies have been found and 13 people are still missing. 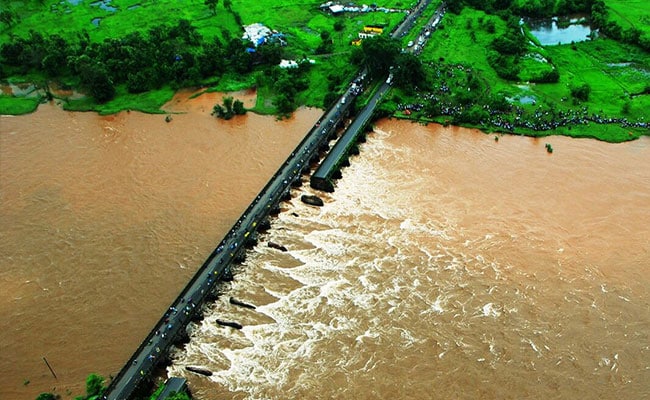 A 300 kg magnet was lowered into the 20-foot deep river to trace the buses.

Teams of rescuers including navy divers have been searching the river using a chopper, aircraft and inflatable dinghies but they have been severely challenged by the strong currents. A boat carrying National Disaster Response Force personnel capsized this morning.

On Wednesday, even elite marine commandos or MARCOS found the current too strong to risk diving into the river.

The large crowd of people watching the rescue efforts includes family members of those missing.

More than a dozen members of Gorakhnath Munde's family have been staking out on the banks. Mr Munde, 47, was the driver of the other bus that fell.

The family of Vilas Desai, a bus conductor, is also growing increasingly angry and helpless. "Why is it that nobody is telling us where to go and what arrangements have been made?" questioned his brother-in-law Pramod Surve.

The Maharashtra government has ordered an inquiry into the incident.

A lawmaker said in parliament that two years ago, British officials had warned Maharashtra that the bridge is too old and should be closed to public. Yet the bridge was declared safe just two months ago.
Comments
Mahad bridge collapse