Maggi Noodles Being Tested by Maharashtra, Gujarat After Flunking in UP

Nestle India, the manufacturer of Maggi noodles, says it has all strict safety and quality controls in place. (Representational image)

Maggi noodles contain not only monosodium glutamate, or MSG, but it also contains extremely high levels of lead - nearly seven times the permissible limit - a test conducted by the government has found. While Uttar Pradesh, which tested the samples, is contemplating legal action, Maharashtra and Gujarat have followed suit, sending samples for testing. The results are expected next week.

"The test conducted at Kolkata's National Food Laboratories proves the company's claims of not adding MSG is false," said a food inspector at Barabanki, Uttar Pradesh. Going by the levels of lead present -- 17.2 ppm even though the permissible limit is upto 2.5 ppm -- the laboratory has also declared it as unsafe for health.

Nestle India, which manufactures the popular brand of Noodles, had said in a statement that MSG, a taste enhancer, is not added in the product. Rather, "glutamate, if present, occurs naturally in some of the ingredients used," the company said. Every packet of Maggi noodles carries a tag that says, "No added MSG".

Regarding the levels of lead, Nestle had said, "We regularly monitor for lead as part of our stringent quality control processes, including testing by accredited laboratories. These tests have consistently shown lead levels in MAGGI Noodles to be within permissible limits."

The batch of noodles that was tested at the Kolkata laboratories, has been withdrawn from across Uttar Pradesh by the state's Food Safety and Drug Administration.

PK Singh, Commissioner of Uttar Pradesh Food Safety and Drug Administration, said, "We have referred the matter to our legal cell and appropriate action will be taken. Meanwhile, we have sent more samples for testing."

Lead is a highly toxic material and its presence in blood in high levels may result in lead poisoning, which can lead to severe mental and physical impairment, especially in children.

Dr Mukul Das of the Indian Institute of Toxicology said, "Lead is harmful, particularly for the children. It slows down development process and learning ability." 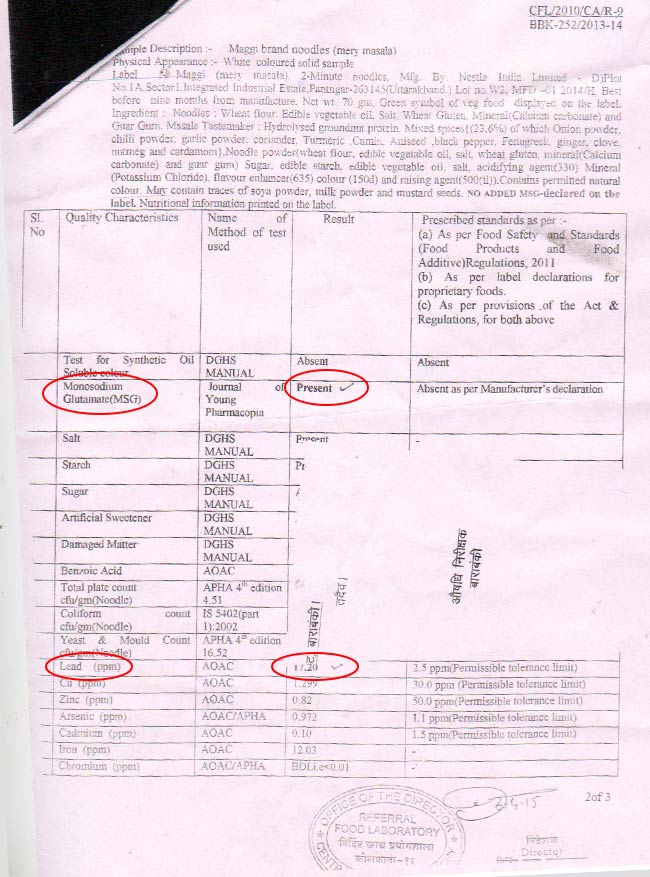