After Toppling Congress From Madhya Pradesh, BJP May Import UP Model: Sources

The Congress government broke down after the resignation of Kamal Nath on Friday; he had been due to face a floor test the party would lose after 22 former MLAs loyal to Jyotiraditya Scinda quit 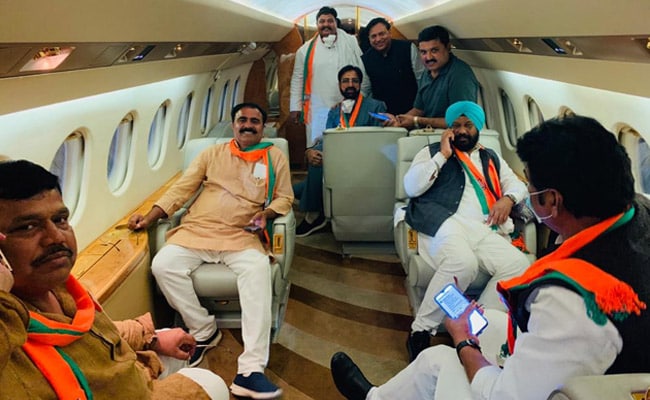 The BJP may replicate its Uttar Pradesh model in deciding its top leaders in Madhya Pradesh, where the party has grabbed power after toppling the Congress government of Kamal Nath. This will involve choosing a Chief Minister and two Deputy Chief Ministers, one of whom will be a Jyotiraditya Scindia loyalist, with one of the deputies holding a position in the new cabinet of ministers.

Sources within the Madhya Pradesh BJP have said the party's central leadership could take a final decision in this matter by Monday and the new government is likely to be in place by March 25 - an auspicious day as it marks the start of the nine-day Chaitra Navratra.

The Congress government in the state, elected in December 2018, broke down after the resignation of Kamal Nath on Friday. He had been due to face a floor test that the Congress was certain to lose after 22 former MLAs loyal to Mr Scinda quit. Their resignations left the Congress with 92 MLAs in a house where the majority mark was set at 104. The BJP, with 106, inched past the finishing line.

Congress's loss in Madhya Pradesh was the second time it had been beaten by the BJP in a floor test after MLAs from the ruling party quit; in November last year the Congress-JDS coalition in Karnataka was ousted by the BJP in suspiciously similar fashion.

The BJP's victory in Madhya Pradesh came after high drama in the Supreme Court this week, where the Congress argued, unsuccessfully, that its MLAs had been abducted and forced to resign.

Meanwhile, 21 of the 22 former Congress MLAs (their resignations have been accepted by Assembly Speaker NP Prajapati), joined the BJP this afternoon at the residence of party chief JP Nadda. They did so, in the presence of Jyotiraditya Scindia, General Secretary Kailash Vijayvargiya, Union Minister Narendra Singh Tomar and former Madhya Pradesh minister Narottam Mishra.

Mr Scindia has already joined the BJP, having quit the Congress, his party of nearly two decades, in a sensational swap that heralded the fall of the Kamal Nath government.

The 21 politicians who joined the BJP today had camped out in party-ruled Karnataka during the chaos and returned to Bhopal this evening.

Kamal Nath, who is now acting Chief Minister while the BJP finalises its plans, flew to Delhi today.

He will discuss the situation in Madhya Pradesh with the party's senior leaders and finalise strategy ahead of by-polls to 25 Assembly seats.

Victory in those seats could swing the state back into the hands of the Congress.