The twenty-two former Congress legislators, who had resigned from the party following Jyotiraditya Scindia's resignation, formally joined the Bharatiya Janata Party on Saturday. 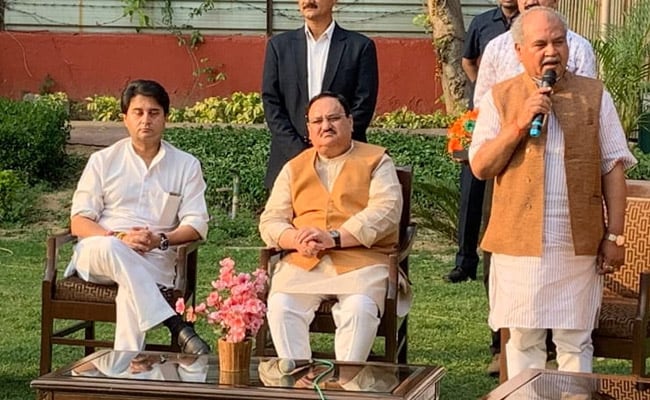 The twenty-two former Congress legislators, who had resigned from the party following Jyotiraditya Scindia's resignation, formally joined the Bharatiya Janata Party on Saturday.

The resignation of these MLAs played a critical role in the eventual fall of Kamal Nath-led Congress government in Madhya Pradesh.

These leaders, along with Jyotiraditya Scindia, met BJP president J P Nadda at his New Delhi residence, who welcomed their decision to join the saffron party.

"With a pledge of Madhya Pradesh's development and progress, 22 ex-legislators and my former colleagues from the Congress, who are a part of my family, met BJP President JP Nadda today, and joined the party," Mr Scindia said in a tweet in Hindi.

The 22 MLAs, all loyalists to former Congress leader and Madhya Pradesh royal Jyotiraditya Scindia, resigned from the party on March 9, bringing the Kamal Nath government on brink of collapse.

The resignations, however, were not immediately accepted by Assembly Speaker NP Prajapati.

The MLAs were later taken to a resort in Bengaluru by BJP to avoid any horse-trading attempts.

After weeks of political drama, the resignations of all the MLAs were accepted on Thursday following a Supreme Court judgment.

Kamal Nath resigned the next day, hitting out at Jyotiraditya Scindia after his resignation, terming the latter as "power-hungry".
"Everyone saw how crores of rupees were spent. How a democratically-elected government was brought down by the BJP who lured a power-hungry, ambitious "Maharaj" rejected by voters and 22 greedy MLAs influenced by him," said Kamal Nath.

The resignations of the MLAs and their subsequent travel to Bengaluru was termed as "kidnapping" by the ruling Congress.

Party leaders like Digvijaya Singh claimed they had sent SOS that their phones had been snatched and they were not allowed to speak to anyone.

The rebels, however, countered the Congress assertion by routinely posting videos in which they said they were in Bengaluru of their own volition and that they wanted no further talks with the Congress. They also asked for protection to return to Bhopal, as demanded by the Speaker, saying their lives were in danger from Congress leaders.

The resignations of the MLAs brought down the total strength of the assembly to 206, with Congress' tally standing at 92, while the BJP crossing the majority with 105 MLAs.