This, he said, was his second mistake after supporting VP Singh who led a Janata Dal government supported by the BJP and Left parties from outside. 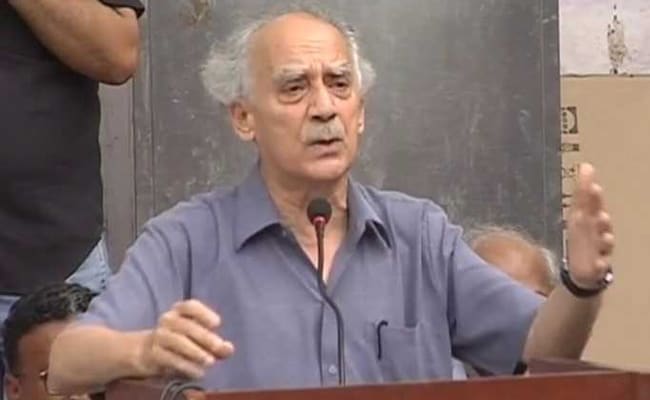 Kasauli: BJP leader and former minister Arun Shourie on Friday said he had made a "mistake" by supporting Narendra Modi to be the Prime Minister.

This, he said, was his second mistake after supporting VP Singh who led a Janata Dal government supported by the BJP and Left parties from outside.

Mr Shourie was speaking on "How to recognise rulers for what they are".

"Don't go by what these fellows say now. Go by what they have been saying in the past," he said.

He said leaders should also be judged by examining their claims "in great detail".

"I think this is one of our great failures, of our newspapers, of people like me who did not examine the claims about the Gujarat model," he said, referring to PM Modi's claims of Gujarat development when he was Chief Minister of the state.

"Now we are realising that it (the Gujarat model) never existed in the first place. That it was an event management. For example, everybody is surprised about these Gujarat Vibrant Summits. Rs 10 lakh crore have been promised, Rs 15 lakh crore investment promised. In all the nine summits, it took three years for the organisations to find out that out of all those pledges which were announced and proclaimed as great successes what proportion resulted in actual investment. Can anybody guess? Six per cent! But it was a great business success," he said.

He also castigated the government over its job claims, saying between January and April this year 1.5 million jobs have been lost.

"And they had promised to create 2 crore jobs per year. But four days ago, there were full page ads that they have created five and half crore jobs. What kind of magic is this that so many jobs were created but we can't see it."

He said that in politics the main point to watch for a leader was their character and their adherence to truth.

Promoted
Listen to the latest songs, only on JioSaavn.com
"If that is not there many other things will also not. Never believe that certain things being said by people close to a person are not being said by the person. Such leaders are ventriloquists," said Mr Shourie.

"Just believe I am talking about (US President) Donald Trump. Any resemblance closer home is your imagination."