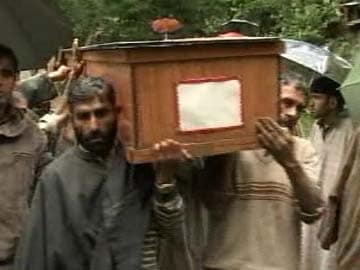 FILE photo: Three people were killed by the Army in a fake encounter in Machil sector in J&K in 2010

New Delhi: The Army has ordered court martial proceedings against two officers and four soldiers for their alleged involvement in the 2010 Machil fake encounter case that had triggered a two month-long agitation in the Kashmir Valley.

Colonel DK Pathania, the Commanding Officer of 4 Rajput Regiment, the unit involved in the fake encounter, Major Upinder and four other personnel will face court martial. An official spokesperson of the Northern Command said the order will highlight the Army's resolve to ensure justice.

On April 30, 2010, the Army said it had killed three infiltrators in the Machil sector and claimed that they were Pakistani terrorists. The three men who were killed were later identified as Shahzad Ahmad Khan, Riyaz Ahmad Lone and Muhammad Shafi Lone, all residents of Nadihal in Baramulla district.

Their families alleged that the Army lured them to a border area on the pretext of giving them jobs but later killed them and claimed they were terrorists.

Promoted
Listen to the latest songs, only on JioSaavn.com
In July 2010, the Jammu and Kashmir police filed a chargesheet against Col Pathania, Major Upinder and seven others in the court of the Chief Judicial Magistrate of Sopore.

"A very detailed and exhaustive enquiry was conducted with the assistance of state police and judicial department to summon witnesses, record evidence and establish culpability of the accused personnel," the army spokesperson said today.
Comments
Machil encounter