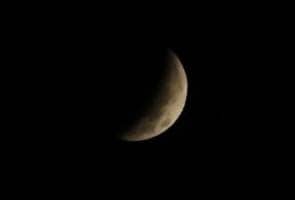 A picture taken on Dec 21, 2010 in the
National Park of the volcano Teide
(2300m of altitude) shows the moon during
a total lunar eclipse. (AFP photo)

New Delhi: The longest and darkest total lunar eclipse of the century will occur today, giving sky enthusiasts all over the country an opportunity to witness the event.

"The total phase of this lunar eclipse will last 100 minutes. The last eclipse to exceed this duration was in July 2000," she said.

The next such eclipse will only take place in 2141.

The eclipse will be visible completely in Africa and Central Asia. It will be visible rising over South America, Western Africa and Europe, and seen setting over Eastern Asia, and Australia, C B Devgun from Science Popularisation Association of Communicators and Educators (SPACE) said.

The magnitude of one of the relatively rare total lunar eclipse will be 1.70, N Sri Raghunandan Kumar of Planetary Society of India said.

The next lunar eclipse to be viewed in India will be in December this year.

Also, a star named 51 Ophiuchi will be occulted during the eclipse.

Sky enthusiasts can witness the whole sequence of the occultation in the zodiacal constellation of Ophiuchus.

A lunar eclipse occurs when the Earth, in course of its orbit around the Sun, comes between the Moon and Sun in such a way that Moon is hidden in the shadow cast by Earth.

This can occur only when the Sun, Earth, and Moon are aligned in a straight line.

Vigyan Prasar, Department of Science and Technology, along with the Nehru Planetarium and the Children's Resource Centre of the Nehru Memorial Museum and Library will be organising an all-night lunar eclipse 'Moon Carnival' for all interested sky enthusiasts in the Capital today.

"The lunar eclipse on June 15 is the longest and darkest total lunar eclipse that will occur in the 21st century, and will not be surpassed in duration until 2141. So, we are trying our best to popularise the event," Nehru Planetarium Director N Rathnasree told PTI.

Moon observation will start well ahead of the eclipse, she said, adding participants will be encouraged to learn and identify lunar features.

This will help them determine precise timings of the immersion of the various lunar craters in the umbral shadow of the Earth, during the eclipse, she added.

The enthusiasts will also witness some of the brighter stars of the constellation Ophiuccus being occulted by the Moon, before and during the eclipse, she said.

Science Popularisation Association of Communicators and Educators (SPACE), an NGO, is working to break the myths and superstitions associated with the celestial phenomenon.

Promoted
Listen to the latest songs, only on JioSaavn.com
Many people still believe that eating food during eclipse harms the body. SPACE will encourage eating during the eclipse and then reporting the condition of your health before and after the phenomena. This cumulative report will be sent to UNESCO, SPACE PRO Mila Mitra told PTI.

Avid photographers will capture the celestial treat on camera and contribute the images to a collective pool. A live webcast of the eclipse will be shown on the SPACE website.