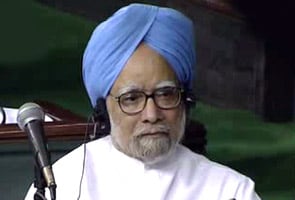 New Delhi: The Prime Minister conceded to the demands of a united Opposition and made a statement this morning in Parliament on Anna Hazare's arrest. "It is my painful duty to report on the events of yesterday", Dr Manmohan Singh said. He stressed that the Delhi Police "had no choice" but to arrest Mr Hazare and that while his government "acknowledges the right of citizens to hold peaceful protests", conditions that guarantee law and order will not be disturbed need to be met.

"Our government does not seek a confrontation with any section of society. But some sections deliberately challenge the authority of the government", said the PM in the Lok Sabha today.

Here is the full text of the PM's statement:

2. It is my painful duty to report to this House certain events that took place yesterday in New Delhi.

3. Hon'ble Members are aware that after extensive consultations and discussions, including deliberations in a Joint Drafting Committee and a meeting of all political parties represented in Parliament, the Government has introduced a Bill in the Lok Sabha on the setting up of Lok Pal. The Bill has been referred to the Standing Committee concerned.

5. On August 2, 2011, an application was made to Delhi Police by an organisation called India Against Corruption for permission to hold a month-long fast beginning August 16, 2011 at New Delhi. Delhi Police held discussions with the applicants in order to identify a suitable place and to formulate the conditions under which the permission could be granted for holding a fast at that place. Eventually, on August 13, 2011, Delhi Police informed the applicants that permission would be granted for the protest at Jai Prakash Narayan Park, near Ferozshah Kotla, subject to permission being granted by the land owning agency and subject to certain conditions.

6. Delhi Police also informed the applicants that they would have to give an undertaking to abide by the conditions.

7. However, on August 15, 2011, the organisers refused to accept six of the conditions, including the condition that the protest fast would be limited to three days. Hence, Delhi Police informed the applicants that, since they had declined to accept some of the conditions and refused to give the undertaking to abide by all the conditions, permission would not be granted to hold the protest fast at Jai Prakash Narayan Park. Prohibitory orders under section 144 CrPC were also imposed on August 15, 2011 in and around Jai Prakash Narayan Park and some other areas.

8. On the evening of August 15, 2011, Shri Anna Hazare, through public statements, made it clear that he and his supporters would converge at Jai Prakash Narayan Park and defy the prohibitory orders under section 144 CrPC. Yesterday morning, Delhi Police reviewed the situation. Delhi Police came to the conclusion that it was clear that Shri Anna Hazare and his supporters would commit a cognizable offence and there was a likelihood of a breach of peace. Hence, Shri Anna Hazare and six others were arrested, as a preventive measure, under section 151/107 CrPC. They were taken to the Delhi Police Officers' Mess at Alipur Road and, subsequently, produced before a Magistrate. Delhi Police did not seek the police remand of the arrested persons. The Magistrate offered to release the arrested persons on their personal bonds subject to the condition that they would undertake not to violate the prohibitory orders. However, Shri Anna Hazare and others refused to give such an undertaking or furnish personal bonds. Hence, the Magistrate remanded the arrested persons to 7 days' judicial custody.

9. Meanwhile, during the course of yesterday, about 2,603 persons were detained in Delhi when they were proceeding to or were in areas where prohibitory orders under section 144 CrPC were in force. All of them were released later in the evening yesterday.

10. Late yesterday evening, Delhi Police received information that Shri Anna Hazare intended to move the Supreme Court challenging the orders of Delhi Police. Delhi Police also received information that the petition was likely to be mentioned before the Supreme Court on Wednesday, i.e. today, for urgent hearing. Since there were reasonable grounds to believe that Shri Anna Hazare had opted to seek legal remedies, Delhi Police did not apprehend any imminent breach of peace or imminent disturbance to tranquillity if the arrested persons were released. Hence, Delhi Police moved the Magistrate concerned to review his earlier order and the Magistrate was pleased to release Shri Anna Hazare and the other arrested persons at about 7 p.m. yesterday. The jail authorities informed Shri Anna Hazare and others that orders for their release had been received. However, Shri Anna Hazare and others (except one) declined to leave the jail premises unless the Government gave an undertaking that they would be permitted to hold their protest fast at Jai Prakash Narayan Park without any condition.

11. Our Government acknowledges the right of citizens to hold peaceful protests. In fact, Delhi Police have allowed several such protests, but in each case appropriate conditions have always been imposed and the organisers were always required to give an undertaking to abide by all the conditions. Shri Anna Hazare and his supporters would have been allowed to hold their protest fast if they had accepted the conditions under which the permission was granted and had undertaken to abide by the conditions. Since they declined to do so, Delhi Police was obliged to refuse permission to hold the protest fast.

12. The Government wishes to stress that the issue before the nation is not whether a Lok Pal Bill is necessary or desirable. All of us in this House are agreed that a Lok Pal Bill must be passed as early as possible. The question is, who drafts the law and who makes the law? I submit that the time-honoured practice is that the Executive drafts a Bill and places it before Parliament and that Parliament debates and adopts the Bill with amendments if necessary. In the process of adoption of the Bill, there will be opportunities for Shri Anna Hazare and others to present their views to the Standing Committee to which this Bill has been referred by the Hon'ble Speaker. The Standing Committee as well as Parliament can modify the Bill if they so desire. However, I am not aware of any constitutional philosophy or principle that allows anyone to question the sole prerogative of Parliament to make a law. In making a law on Lok Pal, the Government has faithfully adhered to the well-settled principles. As far as I am able to gather, Shri Anna Hazare questions these principles and claims a right to impose his Jan Lok Pal Bill upon Parliament.

13. I acknowledge that Shri Anna Hazare may be inspired by high ideals in his campaign to set up a strong and effective Lok Pal. However, the path that he has chosen to impose his draft of a Bill upon Parliament is totally misconceived and fraught with grave consequences for our Parliamentary democracy.

14. Our Government does not seek any confrontation with any section of the society. But when some sections of society deliberately challenge the authority of the Government and the prerogative of Parliament, it is the bounden duty of the Government to maintain peace and tranquillity. Delhi Police, as the authority charged with the responsibility, took the minimum steps necessary to maintain peace and tranquillity in the capital city. Inevitably, though unfortunately, it led to the arrest and subsequent release of Shri Anna Hazare and some of his supporters. I sincerely hope that the incidents of yesterday will not be repeated today or in the future.

15. I should also make it clear that the issue between the Government and Shri Anna Hazare is not one of different attitudes to fighting corruption. In my independence day address, I spoke at length about the need to deal effectively with corruption. I would like to assure the House that we are determined to provide a Government that is transparent, accountable and responsive at all times and determined to fight corruption. But as I said on 15 August at the Red Fort, there is no magic wand by which, in one stroke, we will get rid of menace the of corruption. We have to work simultaneously on several fronts. In my 15 August address, I have outlined some of the measures we intend to put in place to strengthen our fight against corruption. I invite all sections of this House to join hands with us to deal with the cancer of corruption.

16. With respect to the events of yesterday, I will only say that a functional democracy must allow multiple voices to be heard. But differences of opinion must be resolved through dialogue and consensus. Those who believe that their voice and their voice alone represent the will of 1.2 billion people should reflect deeply on that position. They must allow the elected representatives of the people in Parliament to do the job that they were elected for.

17. India is an emerging economy. We are now emerging as one of the important players on the world stage. There are many forces that would not like to see India realize its true place in the Comity of Nations. We must not play into their hands. We must not create an environment in which our economic progress is hijacked by internal dissension. We must keep our mind focused on the need to push ahead with economic progress for the upliftment of the 'aam aadmi'.

18. I appeal to all sections of this august House to ensure that the Government and its processes, and the Parliament and its processes function smoothly and effectively. There is no substitute for that. If some people do not agree with our policy, there will be a time when they will have an opportunity to present their points of view to the people of India.

19. I request all political parties to ensure that Parliament functions smoothly. There are very important legislative measures that are required to be passed. If we do not pass them, we will do great injustice to the people of India and in turn hurt the 'aam aadmi'. We are willing to debate every issue in Parliament, and we have demonstrated that we are co-operating with the Opposition in every possible way to ensure that Parliament functions smoothly.

Promoted
Listen to the latest songs, only on JioSaavn.com
20. We as elected representatives of our people should do nothing to weaken our people's faith in the capacity of our democracy, our institutions and our social ideals and values to overcome all difficulties. We should have faith that we can build a promising future for ourselves. Let us unite in that faith.