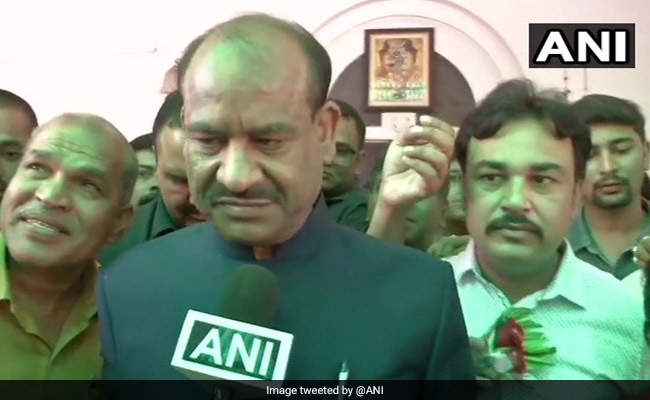 Om Birla was elected the Lok Sabha Speaker on Wednesday.

"There is no challenge. We will run the house by keeping all party leaders together... 'Vande Mataram' and 'Bharat Mata Ki Jai', who said you cannot say this?" Mr Birla told news agency ANI.

Om Birla, a three-time lawmaker from Rajasthan's Kota, was unanimously elected the new Lok Sabha Speaker after opposition parties supported his candidature on Wednesday. Prime Minister Narendra Modi, who moved the motion for his election, personally led him to the Speaker's chair after the formalities were over.

A virtual slogan-shouting contest between the treasury and opposition benches overshadowed the oath-taking by the newly-elected representatives on Monday and Tuesday, with some raising religious slogans like ''Jai Shri Ram'' and ''Allahu Akbar''; one lawmaker even shouted ''Inquilab Zindabad''.

Many lawmakers ignored the interim Speaker's direction to refrain from raising the slogans and continued with it.

All India Majlis-e-Ittehadul Muslimeen (AIMIM) president Asaduddin Owaisi was met with loud chants of "Jai Shri Ram", "Bharat Mata Ki Jai" and "Vande Mataram" from BJP parliamentarians. The Hyderabad lawmaker, however, smiled and gestured for louder chants as he walked up to the chair for his swearing-in as a member of the 17th Lok Sabha. Taking a short oath, Mr Owaisi, responded, saying "Jai Bheem, Jai Meem, Takbeer Allahu Akbar, Jai Hind".

On Tuesday, Samajwadi Party lawmaker Shafiqur Rahman Barq refused to chant "Vande Mataram", saying "it's against Islam." His refusal was followed with chants of "Vande Mataram" and "Jai Shree Ram" by other leaders present in parliament. It also drew protests from members of treasury benches who demanded an apology from him.