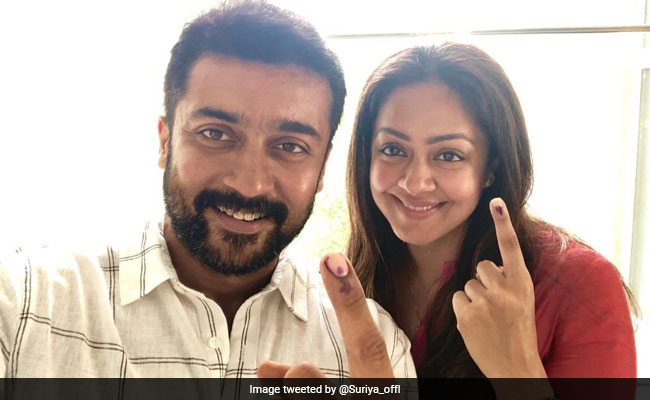 Elections 2019: Actor Suriya and his wife Jyothika shared a picture with their inked fingers.

Top stars from the Tamil film industry - Rajinikanth, Kamal Haasan, Vijay, Ajith and Suriya came out to vote in Tamil Nadu today as the state goes to polls for Phase 2 Lok Sabha Elections 2019. The state is is holding bypolls for 18 assembly constituencies that were lying vacant. The popular actors encouraged their fans to perform their national duty and participate in the "festival of democracy". Actors Sivakarthikeyan, Sirish, Karthi, Jyothika, Dhanush, Shruti Haasan, GV Prakash Kumar, Arun Vijay and Trisha were also spotted in voting queues. This is the first election in the state after the death of AIADMK's J Jayalalithaa and DMK's M Karunanidhi. The Lok Sabha polls will therefore test the leadership of Karunanidhi's son MK Stalin, who succeeded him as party president, and also that of Chief Minister Edapadi Palaniswami and deputy chief minister O Paneerselvam, who now run the government and the AIADMK. 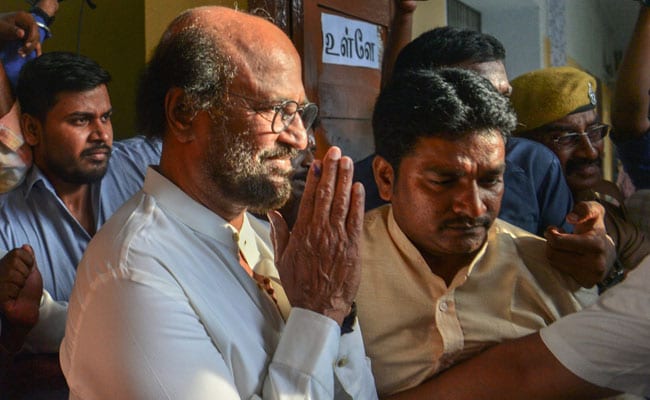 Rajinikanth after voting at a polling booth in Chennai.

Actor-politician Rajinikanth was one of the earliest stars to vote at 7 AM in Stella Maris College in Chennai. His short and simple message to his fans was, "All should vote." 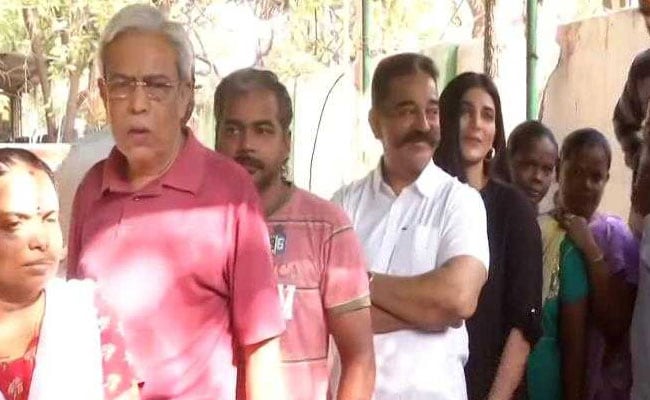 Kamal Haasan and Shruti Haasan in queue at a polling booth.

Actor and Makkal Needhi Maiam party chief Kamal Haasan and his daughter Shruti Haasan were among the early voters in Tamil Nadu.

"Today is the day!! Vote because it matters!" Shruti Haasan tweeted before going to the polling centre. Later she shared a picture of herself with inked finger with caption, "Vote for the change you want to see ! #everyvotecounts"

Vote for the change you want to see ! #everyvotecounts

Tamil superstar Ajith Kumar, who starred in over 50 films, came with his wife Shalini to fulfill his duty as a citizen. He entered the polling booth amid loud cheer from his fans.

Actor-singer Vijay was also spotted waiting for his turn in a long queue at a polling booth. The videos of the 44-year-old star went instantly viral.

Popular actor Suriya and his wife Jyothika voted and shared a picture of themselves with their inked fingers.

Think and VOTE !! It's important that you do.

A day before polling, Tamil star Dhanush tweeted, "Think and VOTE !! It's important that you do." Dressed in a white shirt and dhoti, the Aadukalam actor went alone to vote.

Around 5.8 crore voters in Tamil Nadu will choose between 822 candidates contesting for the 38 Lok Sabha constituencies today.