Another Bangaldeshi Actor Asked To Leave Country For Election Campaigning

Ghazi Abdul Noor was issued a "Leave India" notice by the Ministry of Home Affairs, a day after the BJP approached the Election Commission citing a video of him purportedly campaigning for Saugata Roy at a rally in the Dum Dum constituency. 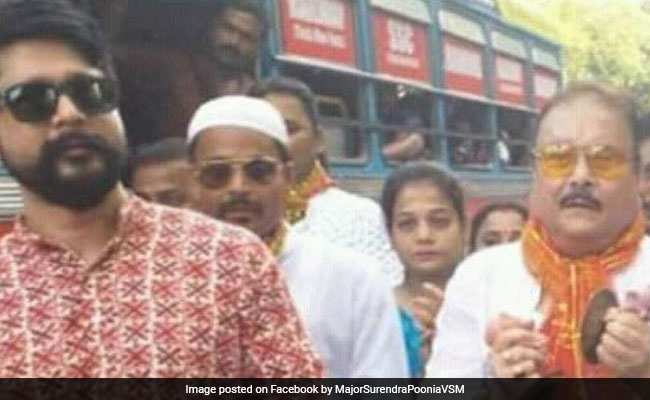 A second Bangladeshi actor has been asked to leave the country immediately after he was seen campaigning for the Trinamool Congress in the Lok Sabha elections in West Bengal earlier this week.

Ghazi Abdul Noor was issued a "Leave India" notice by the Ministry of Home Affairs, a day after the BJP approached the Election Commission citing a video of him purportedly campaigning for Saugata Roy at a rally in the Dum Dum constituency.

It was also found that Mr Noor's was in India despite the expiry of his visa. "Appropriate action is also being taken regarding his overstay in contravention of visa rules," a home ministry official was quoted as saying by news agency PTI.

Voting in the Dum Dum seat will be held May 19, along with eight other constituencies.

Mr Noor is the second Bangladeshi actor to be sent back this week, after Ferdous Ahmed. Like Mr Noor, Ferdous Ahmed was also campaigning for the Trinamool Congress.

Bengal BJP targeted Chief Minister Mamata Banerjee's party, calling these instances "a gross violation of the basics of democratic structure". BJP's West Bengal vice-president Jay Prakash Majumdar said: "This act is in violation of the terms of visa and yet another case of a foreigner actively influencing the electoral process."

Mr Ahmed's presence at a Trinamool roadshow on Sunday triggered a row, following which the Home Ministry cancelled his business visa. "He also has been blacklisted. FRRO (Foreigners Regional Registration Office) Kolkata has been directed to ensure compliance of these orders," a senior bureaucrat in the ministry said.

According to the Home Ministry officer, granting visas is the right of Government of India and the state has no role in it. "A foreigner can't come to India and campaign for a political party," he added.
Mr Ahmed is said to be visiting India on a business visa. The Deputy High Commission for Bangladesh also asked him not to take part in the election campaign in India and return to his country.

According to reports, Mr Ahmed has been working in India's Bengali film industry these days.

BJP leader Babul Supriyo had posted photos of both actors on Twitter, highlighting the violation of the poll code.

Why would Ferdous Ahmed, a Bangladeshi Actor join TMC's election campaign? Why did @MamataOfficial's party think that it would be appropriate to let a Bangladeshi citizen endorse his preferred party from WB?What is this if not appeasement politics practiced by #TMChhi blatantly? pic.twitter.com/3iZ0mQEwr6

Bengal voted in Jalpaiguri, Darjeeling and Raiganj on Thursday in the second phase of elections. Voting across 5,390 polling stations began at 7 am and ended at 6 pm. The overall voter turnout in Bengal was 76.1%.