Since March 5, Lok Sabha has seen disruptions on daily. The Finance Bill, appropriation bills were passed by the house without discussion. 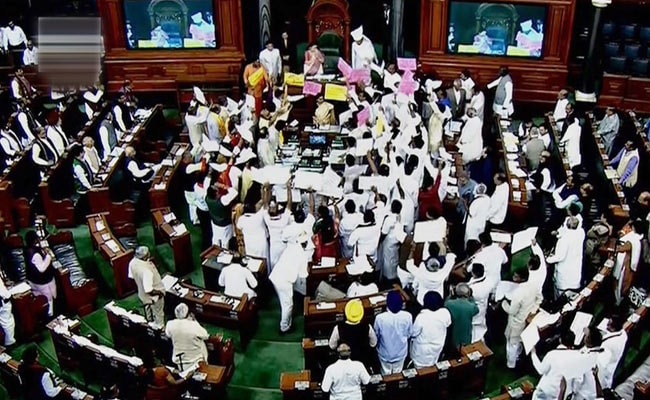 As soon as Speaker Sumitra Mahajan took up the Question Hour, members from various parties trooped into the well holding placards.

When Union Minister Ram Kripal Yadav was responding to the first question on rural housing, the protesting members raised their pitch, drowning his voice.

Parliamentary Affairs Minister Ananth Kumar urged the members of the opposition parties, including the Congress, to return to their seats and allow the house to function.

He said Parliament is the 'maha panchayat' of the country where issues are discussed but the protests are hindering important issues from being raised.

He also thanked the speaker for trying to ensure the house functions smoothly. He said the government is open to discuss issues including bank scam, Cauvery water management board and special status for Andhra Pradesh, but the house has to function first and members have to vacate the well.

As the protests continued, the house was adjourned till 12 noon minutes after it met at 11 am.

Promoted
Listen to the latest songs, only on JioSaavn.com
While members from the Congress, TMC, TDP, YSR Congress and TRS were in the well raising slogans and holding placards, lawmakers from the Left were standing at their seats and shouting slogans.

Since March 5, when the parliament met after a recess, the Lok Sabha has seen disruptions on a daily basis. Amid the din, the Finance Bill and the appropriation bills were passed on Thursday by the house without discussion.