"Will Do What Party Asks Me To": Priyanka Gandhi On Varanasi Suspense 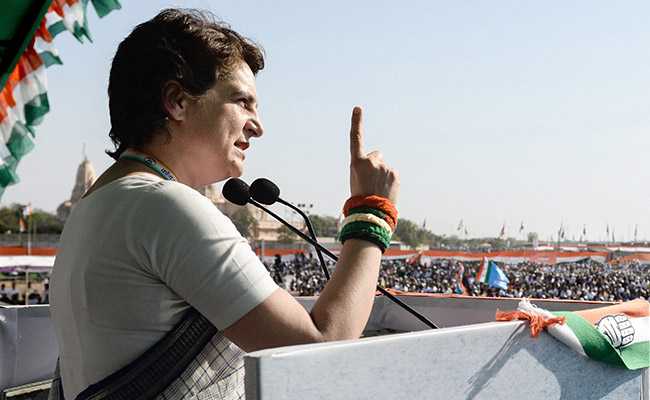 The Congress's newest general secretary Priyanka Gandhi Vadra has not ruled out a fight against Prime Minister Narendra Modi from Varanasi constituency in the national election. Whether she gets to contest the key seat in eastern Uttar Pradesh will be decided by the party, she has hinted.

"I have said this repeatedly that I will do what the party asks me to do," said Priyanka Gandhi in Amethi today, according to news agency PTI. She is on a tour of the constituency represented by her brother and Congress chief Rahul Gandhi and Raebareli, the constituency of her mother and UPA chairperson Sonia Gandhi.

Last month, it was widely speculated that Priyanka Gandhi may contest from Raebareli, though she had quipped, "Why not Varanasi?"

Rahul Gandhi on Sunday last said his sister will take a call on the Varanasi question, and chose to keep the "suspense alive". But Priyanka Gandhi reiterated it would be the decision of the party chief.

On Monday, the alliance between Mayawati's BSP and Akhilesh Yadav's Samajwadi Party named a candidate for Varanasi in a move that is likely to heat up the battle in PM Modi's constituency, as the Congress expected the backing of the Mayawati-Akhilesh Yadav combine if Priyanka Gandhi contests. But that backing has not been forthcoming.

After years of working in the Congress backrooms of the family strongholds of Amethi and Raebareli, Priyanka Gandhi joined full-time politics in February as in-charge of eastern Uttar Pradesh.

Her brother had contested his first election from family borough Amethi in March 2004. Since then, there has been constant speculation about when Priyanka Gandhi, too, would fight her first election.

After her entry to active politics this year, some Congress leaders commented that had she done it in 2014, it would have had a huge impact electorally.

In 2014, Aam Aadmi Party chief Arvind Kejriwal had taken on PM Modi from Varanasi. While he lost, he came to be seen as a politician ready for a big challenge. The next year, AAP swept to power in Delhi, winning 67 of the 70 assembly seats.

Varanasi will vote on May 19 in the last phase of the national elections.