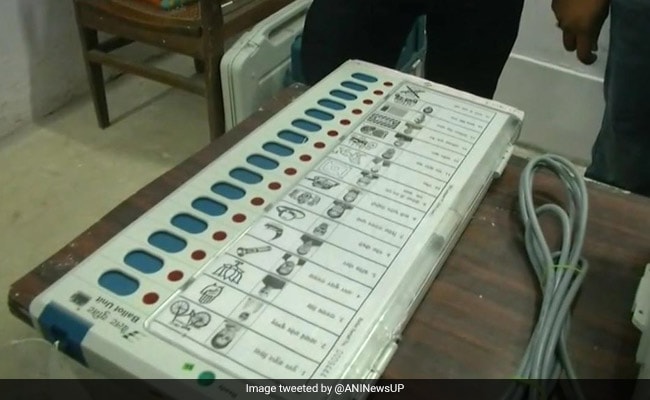 Till 3 pm, 45.07 per cent polling was witnessed in the state, EC officials said.

Over 57 per cent voter turnout was recorded on Monday in 14 Lok Sabha constituencies in Uttar Pradesh where Union ministers Rajnath Singh and Smriti Irani, UPA chairperson Sonia Gandhi and Congress president Rahul Gandhi are in the fray.

"The turnout till 6 pm was 57.33 per cent as compared to 56.92 per cent in 2014," Chief Electoral Officer L Venkateshwarlu told mediapersons at the end of polling that began at 7 am.

Around 2.47 crore people were eligible to select their representative from a filed of 182 candidates in Uttar Pradesh in the fifth phase of the ongoing general elections.

Union minister and BJP's Amethi candidate Ms Irani alleged that the Congress president was "ensuring booth capturing" in the constituency.

She also tagged a video in which an elderly women is seen alleging that her finger was forcibly put on ''panja'' (hand), election symbol of the Congress, though she wanted to vote for ''kamal'' (lotus), the BJP's symbol.

Asked to comment, the CEO said, "It was examined thoroughly and found baseless".

The Bharatiya Janata Party had bagged 12 of the 14 seats in 2014 with the Congress winning Rae Bareli and Amethi.

In Amethi and Rae Bareli, the SP-BSP alliance has not put up any candidate, leaving the two constituencies for the Congress.

The Union home minister is seeking re-election from Lucknow, while his colleague at the Centre Irani is again taking on Rahul Gandhi in Amethi.

In the Faizabad parliamentary constituency, under which the temple town of Ayodhya falls, sitting BJP lawmaker Lallu Singh is taking on Nirmal Khatri of the Congress. Khatri is a former Uttar Pradesh Congress Committee chief.

In Lucknow, the SP has pitted Poonam Sinha, wife of actor-turned-politician Shatrughan Sinha, as the joint ''mahagathbandhan'' (grand alliance candidate against Rajnath Singh).

In the 2014 election, the BJP had won 71 seats in the state and secured 42.63 per cent of the votes, while ally Apna Dal bagged two seats.

The SP won five seats with a vote share of 22.35 per cent while the BSP did not win any seat while securing 19.77 per cent of the votes.

The Congress registered wins on two seats, bagging 7.53 per cent of the votes.