While Vaibhav Gehlot will fight the election from Jodhpur, the Congress is fielding Manvendra Singh from Barmer. 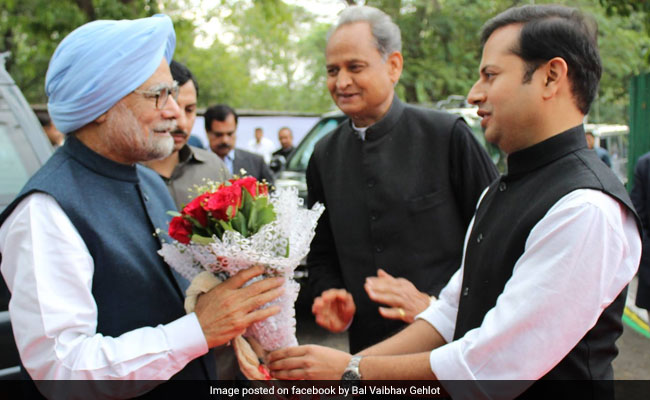 The Congress has announced candidates for 19 of Rajasthan's 25 Lok Sabha constituencies in its first list. While 10 of them are repeat candidates, six will be fighting the polls for the very first time.

No minister in the state cabinet has been given a ticket so far.

Chief Minister Ashok Gehlot's 39-year-old son will fight the election from Jodhpur this time. Significantly, it was in 1980 - the year of Vaibhav Gehlot's birth - that his father first contested from the prestigious constituency. He represented Jodhpur five times in parliament before finally moving into state politics and taking over the reins of the Rajasthan Congress.

Vaibhav Gehlot will take on former BJP Minister Gajendra Singh Shekhawat in what is expected to be a key political battle.

A little west of Jodhpur is Barmer, which will have Manvendra Singh - son of former Union Minister Jaswant Singh - taking up the Congress' mantle. Manvendra Singh had quit the BJP, of which his father is a founding member, following differences with former Chief Minister Vasundhara Raje.

Riding on the Rajput community's anger against Ms Raje for denying his father a ticket in the 2014 elections, Manvendra Singh had famously coined the phrase - "Kamal Ki Phool, Hamari Bhool (Picking the Lotus, Our mistake)" - at a rally in Pachpadra last September. He joined the Congress a month later, reportedly on an assurance that he would get the Barmer ticket.

The party had also fielded him against Ms Raje from Jhalawar in the December assembly elections, but he ended up losing.

Barmer is counted as Jaswant Singh's stronghold because he also enjoys the backing of Muslims in the area, besides usual target voters. Manvendra Singh hopes that support from Rajput, Dalit and Muslim voters will make for a winning combination.

Twelve independent legislators had extended their support to the Congress government in Rajasthan during party chief Rahul Gandhi's rally in Jaipur on Tuesday.

With just 100 legislators in the 200-member house, the Congress was wary of fielding sitting ministers in the parliamentary elections. But with 12 independents supporting the Congress now, it can expect to loosen up a little.