"This Battle Will Be Won," Tweets Rahul Gandhi After Big Congress Meet 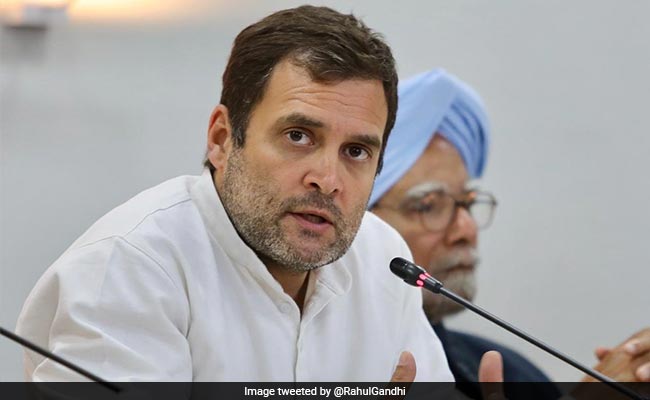 Congress President Rahul Gandhi who chaired a meeting today of the party's highest policy-making body in Gujarat's Ahmedabad tweeted that the party had "resolved to defeat the RSS/ BJP ideology of fascism, hatred", saying the "this battle will be won". Mr Gandhi's tweet came just hours after Prime Minister Narendra Modi targeted the opposition party in a blog on the anniversary of Mahatma Gandhi's 1930 Dandi March.

"On the anniversary of Gandhi Ji's historic Dandi March, the Congress Working Committee in Ahmedabad, resolved to defeat the RSS/ BJP ideology of fascism, hatred, anger & divisiveness. No sacrifice is too great in this endeavour; no effort too little; this battle will be won," Rahul Gandhi, 48, tweeted.

"In many of his works, Gandhi Ji said that he does not believe in inequality and caste divisions. Sadly, the Congress has never hesitated from dividing society. The worst caste riots and anti-Dalit massacres happened under Congress rule," PM Modi wrote in the blog, listing a point-by-point contrast of Gandhi's thoughts and "Congress culture".

At the Congress Working Committee meet in Ahmedabad, Rahul Gandhi and his mother,UPA chairperson Sonia Gandhi, led discussions on key issues ahead of the April-May national election. It was also the first CWC meet of Priyanka Gandhi Vadra, away from her mother and brother.

PM Modi, in his blog, said while his government had "done everything" to punish the corrupt, "...the nation has seen how Congress and corruption have become synonyms. Name the sector and there will be a Congress scam- from defence, telecom, irrigation, sporting events to agriculture, rural development and more."

He accused Congress leaders of "filling their own bank accounts and lead luxurious lifestyles at the cost of providing basic necessities to the poor".