Read inOther Languages
This Article is From Jan 28, 2019

Om Prakash Rajbhar, who has been repeatedly making sharp attacks at his ally, also took a jibe at Chief Minister Yogi Adityanath over his comment that he would resolve the Ayodhya issue in 24 hours. 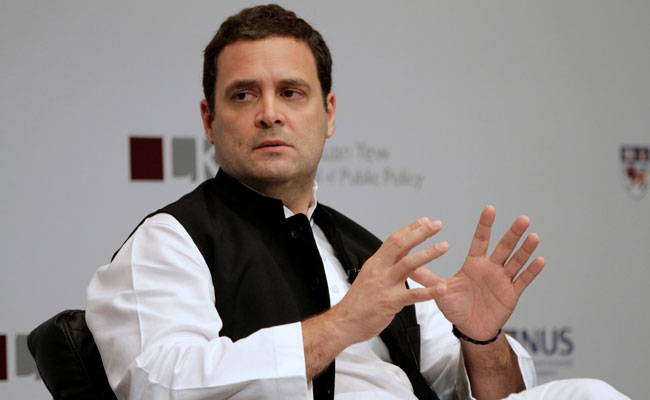 Uttar Pradesh Minister Om Prakash Rajbhar on Monday praised Congress president Rahul Gandhi-- his ally BJP's main rival--saying he was fit to be the prime minister of the country.

"I find Rahul Gandhi fit to be Prime Minister. The final word rests with the people and they will decide who will be India's next Prime Minister," he told reporters in Ballia.

Chief of Suheldev Bhartiya Samaj Party, Mr Rajbhar, who has been making sharp attacks at his ally, also took a jibe at Chief Minister Yogi Adityanath over his comment that he would resolve the Ayodhya issue in 24 hours.

"When the central government could not do anything in five years, what will the Chief Minister do in 24 hours?" he was quoted by news agency PTI as saying.

In an interview to a channel, Yogi Adityanath said the Supreme Court may lose people's trust if there was unnecessary delay in the conclusion of the Ram Temple case.

"I want to say that the court should give its verdict soon, and if it is unable to do so, it should hand over the issue to us. We will resolve the Ram Janmabhoomi dispute within 24 hours. We won't take 25 hours," Mr Adityanath was quoted by news agency IANS.

Om Prakash Rajbhar has been at loggerheads with the party for the last few years. The disgruntled leader recently threatened to quit the National Democratic Alliance.

The BJP has been struggling with allies for the last few years. The party lost Chandrababu Naidu's TDP, Mehbooba Mufti's PDP and Upendra Kushwaha's RLSP as allies last year, and some other allies have threatened to end their partnership with the party.

Earlier this month, PM Modi said the BJP was open to alliances and cherished its old friends, in a hint that it was looking to strengthen the NDA in Tamil Nadu ahead of Lok Sabha elections.

PM Modi's party had also said that it was looking for allies in the southern and eastern parts of the country.

With inputs from PTI, IANS