Will Pay Back Those Who Attack India With "Compound Interest": PM Modi

Addressing a massive NDA rally in Coimbatore, PM Modi underlined his government's commitment to national security and accused the opposition of having no plans in the sphere. 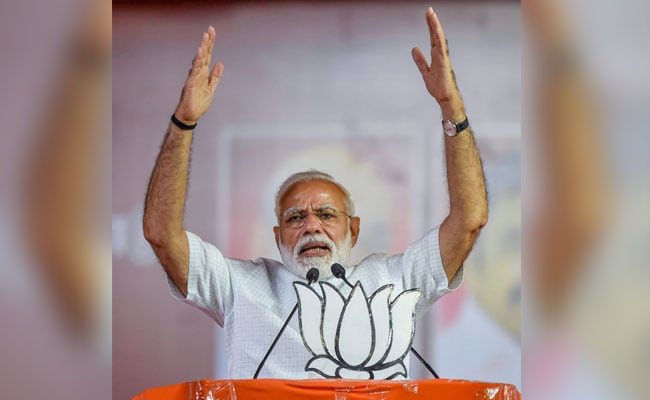 India can attain its true potential only when its security needs were taken care, PM Modi said. (PTI)

Invoking national security as the top-most priority, Prime Minister Narendra Modi Tuesday warned that those trying to attack India will be paid back with "compound interest".

Addressing a massive NDA rally in Coimbatore, PM Modi underlined his government's commitment to national security and accused the opposition of having no plans in the sphere.

"Their attitude made India helpless in front of forces of terror for many years, when they were in power, innocent Indians had become targets of terrorists. Attacks happened in many cities, but the Congress did little," he alleged.

Referring to the 1998 serial bomb blasts in Coimbatore, he said "your own city saw a deadly terror attack in February 1998" and slammed the manner in which the then DMK government headed by M Karunanidhi handled it.

"Today India is different. Anyone who dares to attack India will get a strong response. We will pay back in same coin and with compound interest," PM Modi asserted.

"Today, every Indian has become a chowkidar who is standing firm against forces of terror, misgovernance and corruption," he said.

India can attain its true potential only when its security needs were taken care, he said adding his government has attached top-most priority to the Defence sector and strategic interests.

He pointed out at the centre sanctioning Defence Corridor covering the industrial region of Coimbatore, saying it would not only enable the country attain self-sufficiency in defence manufacturing but also generate jobs for the locals.

The Prime Minister, addressing his second rally in Tamil Nadu after the Lok Sabha election schedule was announced, said the polls would be a contest between the "pro-people" work of the BJP-led NDA and the "anti-people agenda" of opposition.

Tamil Nadu goes to polls in the second phase on April 18.

PM Modi said the polls were also a fight between NDA's mission of serving the poor and the opposition's design to "capture power."

He criticised the Congress' poll maniofesto, saying it was a document "anti-India forces" were waiting for.

"The Congress manifesto is a document all anti-India forces were waiting for. It made terrorists very happy. Congress Manifesto clearly writes- bail is the rule and jail is the exception," he said.

Taking a dig at former finance minister P Chidambaram, PM Modi said he was "shocked to read the recounting minister headed their manifesto committee. I was not surprised. After all, getting bail is important for his own existence," apparently referring to cases against him and his son Karti.

The Congress manifesto has not made any promises to the middle class and every vote to the DMK-Congress combine in Tamil Nadu was a "vote for higher taxes," he said.