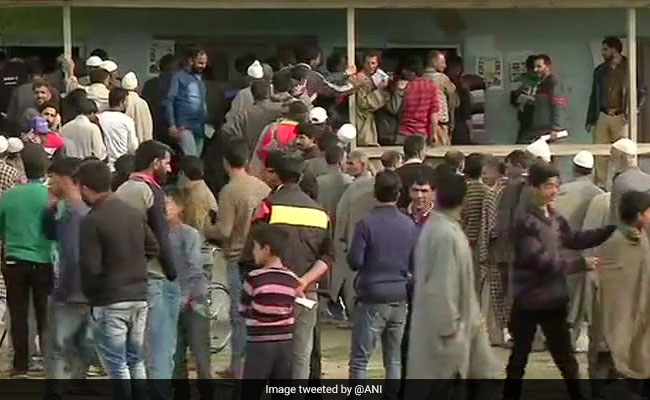 The Congress button on an Electronic Voting Machine (EVM) in Jammu and Kashmir's Poonch is not working and similar malfunctions have been reported in at least six voting booths in the state, a report tweeted by National Conference leader Omar Abdullah claimed, as polling began for the Lok Sabha elections on Thursday.

In a video posted on YouTube, the presiding officer of polling station in Jammu's Poonch district is heard trying to placate a crowd who are seemingly upset at the delay in voting to begin.

"There is no shortage of staff, we started the processes in time. The reason for the delay is that a button on a ballot unit is not working. There is no other problem... We can't say the reason why one button is not working," the officer heard saying.

When pressed further, he says, "The fourth button is not working... haath wala." 'Haath' or hand is the election symbol of the Congress.

"If it was one or two machines we would have understood but there are reports of so many machines are malfunctioning," a member of the crowd is heard saying.

Responding to the report, the Poonch District Election Officer told news agency ANI: "There was an issue with Congress button in Shahpur, our staff replaced the machine. At another polling station BJP button wasn't working, we changed that also."

The Jammu Lok Sabha constituency recorded 13 per cent polling in the first two hours after voting began at 9 am on Thursday, election officials said. Voting has been peaceful so far.

The Jammu seat has the highest number of 24 candidates in the state in these polls. The constituency, spread over four districts of Jammu, Samba, Poonch and Rajouri and covering 20 assembly segments, was won by BJP's Jugal Kishore in the 2014 general elections, defeating veteran Congress leader and two-time MP Madan Lal Sharma by a margin of over 2.57 lakh votes.

This time, however, Mr Kishore faces a tougher contest as the National Conference has extended its support to the Congress candidate and former minister Raman Bhalla, while the PDP has decided not to field any candidate from the Jammu region.

To all my @JKNC_ colleagues & workers in Jammu, Rajouri & Poonch districts please vote & use your vote to send a message against communalism, against fear & against the broken promises of the last 5 years. Vote for Raman Bhalla & send him to the Lok Sabha to fight for J&K.

The Jammu parliamentary seat has over 20 lakh who can cast votes in 2,740 polling stations, including dozens near the Line of Control (LoC) and the International Border.